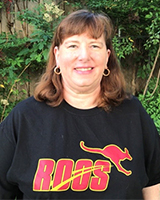 Janet Moody-Melton, Ph. D. retired in 2020 after 34 years in education. Janet is a ‘86 Austin Teacher Program graduate. She began teaching in the Fall of ‘86 on the Northside of Fort Worth teaching First Grade. Over the next several years, Janet taught a First/Second grade mixed age classroom, Pre-kindergarten, and kindergarten. In 2001, Janet received her Doctor of Philosophy degree in Early Childhood Education from the University of North Texas (UNT). Dr. Melton was an adjunct as well as an assistant professor at the UNT before becoming an Assistant Professor in the College of Education at the University of Texas at Arlington for 10 years. Desiring to work with young children again, she accepted a position teaching on a grant working with ESL first and second graders whose parents were immigrants/refugees from the continent of Africa.

Janet is a very proud ‘Roo parent of Chris Melton, Class of ‘16. She been on the AC Alumni Board since 2013 serving as Homecoming Committee Chair, Board Secretary, and begins her term as Second Vice-President of the Board in 2020.