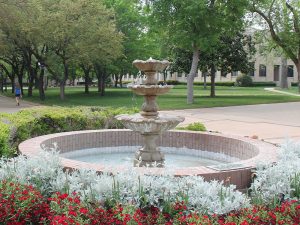 Kappa Fountain is the oldest fountain on campus, built in 1924 with funds from Kappa Gamma Chi Literary Society as part of the College’s Diamond Jubilee Celebration. The fountain was relocated and rebuilt in 1965 and was incorporated into creation of Windsor Mall in 1974 in connection with the 125th anniversary of the College. Kappa Fountain is located between Clyce Hall and Hopkins Center at the eastern end of Windsor Mall.