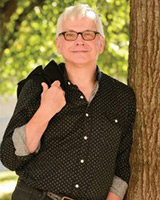 Kim Powers ’79 may have expected to walk through a stage door somewhere in New York City; opportunity came knocking in an unlikely way at an unlikely place. Years later, Kim has received an Emmy and a Peabody award for his writing in 9/11 coverage for Good Morning America. His acclaimed memoir, The History of Swimming, was a noted Barnes & Noble’s “Discover Great New Writers” selection. He works now as senior writer for ABC’s weekly news show, 20/20. Although a long way from the stage, it’s been a dramatic journey. Kim received an Austin College Distinguished Alumni Award at Homecoming 2014.

Read more about him in the ‘Roos Who Write article in the Austin College Magazine.