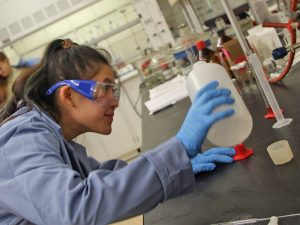 I joined the Felix lab in the summer of 2018 working alongside fellow research students, Madison and Laurel. Working on the synthesis of my compound I learned various techniques I would have not learned during my previous courses at Austin College. Having the opportunity to learn new techniques and apply my work to the bigger science community was very exciting. During the first few weeks, I was also expected to present my project as well as the current work I had done. This task seemed very daunting, as I would be presenting to the other professors and research students within the chemistry department. This feeling quickly went away as I worked with my lab partners who would also be presenting alongside me. In this way, I felt there was a stronger collaborative effect among us as we all struggled to try and present our work in an understandable way. In preparation for the presentation, we had planned out what we would say and practiced presenting together. This allowed us to also troubleshoot any awkward phrasings and gain constructive criticism from each other.

Having been assigned to synthesize the compound Vitepyrroloid A, I ran into some trouble with one of the reactions. While this proved difficult, I continued to work on fixing the conditions; however, during the middle of my summer experience a paper was published by another group that managed to synthesize my compound before me. Considering this, I was reassigned to work alongside Madison in her synthesis. While this development was a huge disappointment for me, it taught me how important and applicable the work I do in the lab is in the real world of research. The most important thing that this experience has taught me is how to pick myself up from a failed attempt and continue in the lab working toward a new project and a team goal. During this transition, I received much support from my fellow lab mates, as well as from my PI. Dr. Felix explained that the potential progress for the Anisucoumaramide has grown now that I would also be contributing to the project. Such a reassurance and apparent appreciation of the work I had done before really helped me to continue. Such an opportunity to work alongside such kind individuals has allowed me to feel my importance in the lab and given me a nice environment to take on the new experiences research has given me.