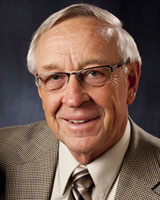 Mel Tjeerdsma, head football coach of the Austin College Kangaroos for 10 seasons before beginning a record-breaking career in Division II coaching at Northwest Missouri State University, will join the Development team in the Austin College Institutional Advancement Division this fall, leading fundraising efforts for athletics enhancement in addition to other responsibilities.

“I am thrilled that Coach Tjeerdsma will join our team,” said Brooks Hull, vice president for Institutional Advancement. “His leadership and reputation among the Austin College family is well known. ‘Coach’ will be an incredible asset to our efforts, and it is great to have him back home at Austin College.”

From 1984 to 1993, Tjeerdsma guided the Austin College ’Roos to three TIAA championships and holds the record for coaching wins in the program. The ’Roos were 59-38-4 in the decade of his career and twice made trips to NAIA Division II playoffs. Tjeerdsma earned three TIAA Coach of the Year Awards.

“I’m so pleased to be returning to Austin College,” Tjeerdsma said. “Austin College gave me my first opportunity to be a head college football coach, and the experience of being part of the Austin College family has stayed with my wife and me even though we’ve been gone for 17 years, we feel we’ve still been a part of that family. We look forward to be a daily part of that again.”

The coach has been back at Austin College many times over the intervening years, including a stop for the Legends athletics award event last summer when he received the College’s 2010 Coach Joe Spencer Award for Lifetime Achievement and Meritorious Service in Coaching.

The legendary coach has one more assignment on the field before the move to Sherman. He has been selected to coach the USA team in the 2011 International Federation of American Football world championships in Austria in July. The USA team won the competition, held every four years, in its first appearance in 2007.

Head football coach at Northwest Missouri State University from 1994 until his retirement at the end of the 2010 season, Tjeerdsma made Division II history, leading his teams to more post-season victories than any other coach and amassing an overall win record that placed him third in the division’s history.

He led his Northwest Missouri teams to the playoffs 13 times in 17 seasons, including three NCAA national championships, and has a 32-10 post-season record. He was named the 2009 Liberty Mutual Division II Coach of the Year, has received four American Football Coaches National Coach of the Year honors, was inducted into the Missouri Sports Hall of Fame and the NCAA Division II Football Hall of Fame, and was named Conference Coach of the Year for the fourth straight season last fall, bringing his total for that honor to 11. The winning-est coach in Northwest’s football history was recognized in 2007 with the playing field at the college named in his honor. He is a 12-time Mid-America Intercollegiate Athletics Association Coach of the Year honoree.

The coach began his collegiate career with eight years as offensive coordinator at Northwestern College in Iowa, where his team won a national championship in 1983. He previously had coached high school football in Iowa, adding a state championship win to his record in 1972.

Tjeerdsma earned his bachelor’s in physical education from Southern State College in South Dakota in 1967. He earned his master’s from Northwest Missouri State in 1977. He and his wife, Carol, have three married daughters and eight grandchildren.