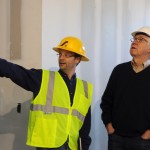 The Austin College community has watched the IDEA Center construction with interest and excitement, watching the progression from installation of below-ground infrastructure to the placing of the observatory dome atop the building.

What those watching may not know is that the building itself operates as an ancient scientific tool. “The building is basically a great big Stonehenge or solstice calendar,” said Steve Goldsmith, Austin College Dean of Sciences. He explained that the building was designed so that students and faculty could mark prominent celestial events (the summer solstice, the winter solstice, and the vernal and autumnal equinoxes).

“This will be a prominent educational feature of the building itself, as students will verify our measurements repeatedly by tracking solar noon and marking the position of the spot of sunlight on the floor,” Goldsmith said. As he has written previously, “That the IDEA Center will include many very cool features is a gross understatement.” And he’s excited about the possibilities. 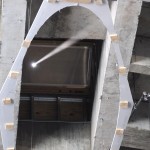 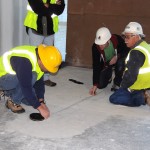 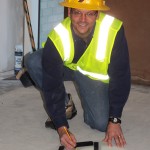 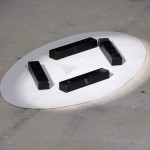 While most people were away from campus on December 21 for the winter solstice, Goldsmith and other faculty, construction engineers, and a small group of guests did a bit of a test, led by Dr. David Baker, professor of physics. The roof of the building has a skylight with a “gnomon hole” that projects a spot of sunlight onto the floor of the atrium. The size and position of the spot of sunlight on the winter solstice matched Dr. Baker’s calculated prediction precisely.

See Goldsmith’s blog for more information on the gnomon hole. “It’s also very relevant to understand that this building contains both the ancient and the modern,” Goldsmith said. The observatory and its custom-built telescope will open the skies to students. The telescope will have an ultra-sensitive, high-resolution camera with the ability to capture digital images of planets and deep space as well as a spectrometer to measure light intensity at several wavelengths.

The equipment will allow students to monitor the weather on Mars, track near-Earth asteroids, and perhaps even measure the spin of other galaxies in deep space—possibilities that Baker is eagerly anticipating.

From ancient to cutting edge, the IDEA Center’s capabilities will add new depth to study of the sciences at Austin College.  See the construction photos.