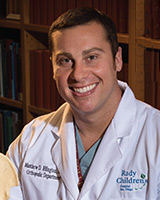 A degree in mathematics and a four-year college football career might not be the background for most physicians. Not only was Matthew Ellington on the Austin College NCAA Division III football team, he started at center for four years and served as a team captain as a senior. He knows well the important lessons a student athlete can learn in areas such as teamwork and perseverance, time management and discipline.

At Austin College, Matt also had the opportunity to expand his knowledge of the world, spending one January Term in Spain, where he explored culture and history while advancing his efficiency in Spanish. During another month-long January Term, he shadowed an orthopedic surgeon—at the same hospital where he eventually would complete his residency. 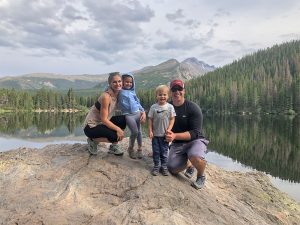 After graduating summa cum laude from Austin College in 2006, Matt enrolled at the University of Texas Southwestern Medical School in Dallas and earned his degree in 2010. He completed a five-year orthopedic surgery residency at Scott and White Hospital in Temple, Texas, and a one-year fellowship in pediatric orthopedics at Rady Children’s Hospital in San Diego, California. He is in practice in Austin Texas as a pediatric orthopedic surgeon, specializing in pediatric sports medicine and takes call at Dell Childrens Hospital, a level 1 pediatric trauma center. He is also on faculty at UT Dell Medical school where he teaches orthopedic residents.

“Austin College is a place where coaches and professors actually care about your education and seeing you succeed,” Matt said. “The combination of athletics, academics, and the pre-medical training at Austin College greatly prepared me for my career in medicine. Learning how to become an effective leader and work as a team through my time playing football has been integral in my career as a surgeon.”