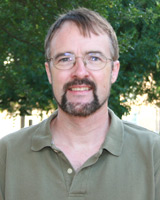 Three compositions written by John McGinn, Austin College assistant professor of music, are featured in the August playlist put forth by the National Association of Composers/USA website.

McGinn’s pieces are among 37 selected in the three-hour playlist, available at Web Radio at www.music-usa.org/nacusa. The playlist repeats continuously throughout the month.

“I’m pleased to be featured and I hope people enjoy the music,” McGinn said.

His compositions are “A Few New Tricks,” movements three and four; “Free Improvisation” with Susan Forrest Harding; and “Dream Prologue.”

“A Few New Tricks” is a 1995 composition performed by the San Francisco ensemble CityWinds. The improvisational piece is from a solo CD produced in 1999. McGinn performs on the keyboard while Harding plucks the strings inside of a piano. The piece won a “Burton’s Best of the Best” listener award on the “Latest Score” show on the WOMR radio station in Provincetown, Massachusetts.

“Dream Prologue” was written while McGinn was an undergraduate and is his most- performed piece. He plays the piano in the solo piece.

Last year, two of McGinn’s compositions were  featured in performances of note. A 20-player work entitled “Score for Score” was premiered by the Inscape Chamber Orchestra in Maryland in October, and “A Tad Low-Strung” was performed at the College Music Society regional conference in March.