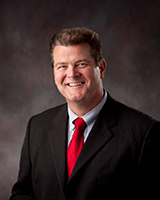 Dr. Tedd Mitchell, president of Texas Tech University Health Sciences Center, will present a lecture on current issues in healthcare and what medical schools are doing to address these issues at Austin College on Tuesday, October 13, at 11 a.m. in IDEA Center, Room 127. The lecture, open to all students, faculty, and staff, will be followed by a book signing.

Prior to his current appointment, Dr. Mitchell practiced medicine at the Cooper Clinic in Dallas, Texas, where he served as medical director of the Wellness Program from 1995 to 2005 and as president and CEO from 2006 to 2010. He is an Ashbel Smith Distinguished Alumnus of the University of Texas Medical Branch, where he received his medical degree in 1987. After graduation, he completed training in internal medicine and served as Chief Medical Resident for UTMB. He is certified by the American Board of Internal Medicine and has subspecialty certification in Sports Medicine. He holds fellowship status with both the American College of Physicians as well as the American College of Sports Medicine. From 1988 to 1996, he served as a captain in the U.S. Army Reserves (Medical Corps).

Dr. Mitchell has received national recognition, including the Clarion Award for health information (2006) and the Walter C. Alvarez Award for Excellence in Medical Communication (2008), for his work as contributing health editor and weekly columnist for USA Weekend from 1998 to 2010. He has coauthored three books: Fit to Lead, Move Yourself, and Fit to Lead 2. He has been involved in the development of public policy regarding health by serving on the President’s Council for Physical Fitness and Sports, to which he was appointed by President George W. Bush in 2002, as well as through his service as a member of the American College of Sports Medicine Board of Trustees in 2007.

The Posey Leadership Institute was initiated in 1994 by Austin College’s President Emeritus Oscar C. Page. Designed to develop women and men of influence, the institute provides an opportunity to engage all interested students in the study and practice of leadership in their personal and professional lives and promote personal, group, and organizational leadership skill and effectiveness. Director Martinella Dryburgh believes “many of our students can learn a great deal from Dr. Mitchell’s many accomplishments both in the medical field and as a leader in his industry.” Austin College and Texas Tech University Health Sciences Center School of Medicine have an early admissions agreement; Dryburgh said hosting this lecture is “a wonderful way for him to meet with the students that have been admitted to his school.”