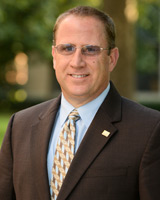 Former Winthrop Viking and BSU graduate Tim Millerick was inducted into the Bridgewater State University Athletic Hall of Fame on October 19, 2019, during the recent Homecoming Weekend on the campus in Massachusetts.

“Tim was a defensive back for the Bridgewater State football team and played for the Bears from 1978 to 1981. He notched 12 career interceptions including a school record at the time, of eight in 1980. He returned an interception for 63 yards and a touchdown against Plymouth State in 1980 and tallied 238 tackles over his final two seasons.

“Former head football coach Peter Mazzaferro noted that Tim was always assigned to cover the best receiver and was outstanding on punt coverage. The 1980 Bears’ defense set the school record, which still stands, for fewest points allowed in a season with 61(6.8 ppg). Tim served as co-captain, was elected the team MVP, and received the coaches’ award for his senior season. He was also selected to the All-New England Football Conference (NEFC) Team in both 1980 and 1981.

“Tim graduated from Bridgewater State in 1982 with a Bachelor of Arts degree in elementary education. He earned his master’s degree in counseling from Bridgewater State in 1986. Since his graduation, Tim has spent 37 years working in higher education and is currently at Austin College in Sherman, Texas, where he has served the past 25 years as vice president for Student Affairs. He was also the athletic director at Austin College from 1996 to 2010.

“Tim has received national recognition for his work in the field of student affairs and higher education from National Association of Student Personnel Administrators (NASPA) and the American College Personnel Association (ACPA). He has also been active with the NCAA serving on numerous committees over the years and currently serves on the Division III Management Council, which is the governing council for the NCAA.”

Tim is the son of the late Paul G. and Dorothy Millerick. Today, he lives in Sherman, Texas, with his wife, Carol (a 1982 Bridgewater State alumna). They have two adult children, daughter Ashley, and son Gregory, who was recently married to Lindsay (Kirkpatrick).