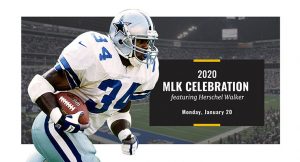 Walker, a star athlete throughout his high school and professional careers, is also a former Olympian, author of the autobiography Breaking Free, and co-chair of the President’s Committee on Health, Nutrition & Fitness.

The motivational rally event is free and open to the public, but registration is required. Breakfast tickets are $15 per person, payable in advance online or at the door; teachers and students can attend breakfast at no charge. Proceeds benefit the local scholarship fund of the Grayson County NAACP. Register online for both events.

The local MLK Jr. Day celebration also includes the Martin Luther King Jr. Commemorative March and Celebration Service on Saturday, January 18. The event begins at noon on the steps of the Grayson County Courthouse at 100 W. Houston. The march will progress through Downtown Sherman to Brockett Street and end at the Austin College campus for the service in Mabee Hall in the Wright Campus Center at 1301 E. Brockett. For information about the Commemorative March, contact Commie Linson of the Sherman Neighborhood Recreation Committee at 903.816.3646. 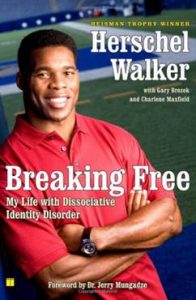 About Herschel Walker
Born into a poor but loving family in Wrightsville, Georgia, Herschel Walker was an overweight child with a stutter who suffered terrible bullying at school. Despite this adversity, he led both his high school football and track team to state championships. He scored a record-breaking 85 touchdowns as a running back, while maintaining an “A” average. In 1980, Walker participated in the Academy of Achievement program as valedictorian of his class.

Walker’s collegiate football career is legendary. He earned consensus All-American honors three consecutive years in both football and track & field, set numerous NCAA and SEC records and capped a sensational college career by earning, in his junior year, the 1982 Heisman Trophy. During his 15-year pro football career, Walker set the still standing, single-season, pro football rushing record of 2,411 yards; led the NFL in rushing; and received numerous All-Pro and Pro Bowl honors. Additionally, Walker held a world record in the 60-yard dash, participated in the 1992 Winter Olympics 2-man United States bobsled team, and is a fifth degree black belt in Tae Kwon Do. In 2002, he was voted into the Collegiate Football Hall of Fame and in 2015 was selected as the greatest player in college football in the last half century. In 2017, Herschel was inducted into the International Sports Hall of Fame and was also honored with the Doak Walker Legends Award.

In September 2009, Walker was signed to compete in Mixed Marital Arts (MMA) with Strikeforce (now UFC) to compete in their heavyweight division. Walker trained at the American Kickboxing Academy in San Jose, California. In his first MMA debut on January 30, 2010, Herschel defeated his opponent by technical knockout.In his 2009 autobiography Breaking Free, Walker shares the inspiring story of his life and diagnosis with dissociative identity disorder (DID). While some might have taken this diagnosis as a setback, Herschel approached his mental health with the same indomitable spirit he brought to the playing field. It also gave him, for the first time, insight into his life’s unexplained passages, stretches of time that seemed forever lost. He also gives voice and hope to those suffering from DID. Walker shows how this disorder played an integral role in his accomplishments and how he has learned to live with it today. His compelling account testifies to the strength of the human spirit and its ability to overcome any challenge.

Walker also visits military bases every month in conjunction with the Patriot Support Program developed along with Universal Health Services, Inc., the nation’s largest facility-based behavioral health provider. The program is dedicated to U.S. military service men and women and assists in areas of behavioral health.

Throughout his career, Walker has established a reputation for honesty and diligence, a sincere commitment to the community, and an unsurpassed passion for excellence. He has applied these same successful principles to his food business, established in 2002. Through Walker’s leadership and personal commitment, his brands now supply major hotel chains, the United States military, various schools, and retail chains and concession organizations.

Walker is also known for his presentations and speeches, where he shares inspiring leadership lessons he has learned about teamwork, goal setting, perseverance, initiative, preparation, discipline and overcoming obstacles.