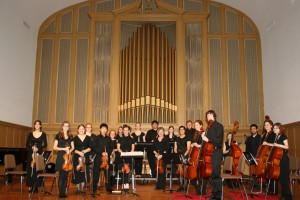 "An Evening of Chamber Music and Jazz" will be held November 22.

The choir and chorale will perform traditional sacred and secular choral music, including works of Stanford, Hassler, Rachmaninoff, Copland, and Lauridsen, as well as spiritual arrangements. The small ensembles will sing a variety of a cappella doo wop, gospel, R&B, and pop arrangements.

As the primary touring musical ensemble at Austin College, the 50-voice A Cappella Choir was founded in 1946 and grew out of a long tradition of vocal music at Austin College dating back to the college glee clubs of the 1890s. The Choir has performed throughout Texas, the United States, and in most European countries and Australia. The A Cappella Choir will return to France in May 2011 with a mass at Notre Dame in Paris and performances at the cathedrals at Chartres, Aix, Angers, and Bordeaux.

The Fall Choral Concert will be held November 21.

“An Evening of Chamber Music and Jazz” will be held at 7:30 p.m. Monday, November 22, in Wynne Chapel. This year’s concert will feature a wind octet by the Classical composer Franz Joseph Haydn, a chamber orchestra setting by the Romantic composer Ottorino Respighi, and a variety of big band jazz in traditional and contemporary styles.