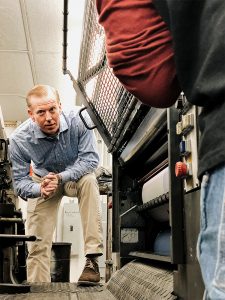 Work was progressing as usual in early March for Travis Stein ’01, co-owner of The Odee Company, a printing business in Dallas. The firm had just received final edits on a print project for the Frisco RoughRiders baseball franchise, and workers were set to print a run of 500,000 pocket schedules and collateral the next morning.

When he got the call to cancel that job since the Rough Riders’ season schedule was suddenly up in the air, Travis knew that work was about to change drastically. Business for printing and promotional items dropped substantially in one day.

Not long afterward, the Odee team got a call from a doctor at a large Dallas hospital. Since the firm worked in promotional items, could they source PPE (Personal Protective Equipment) gowns for the hospital? And, if they couldn’t source them, could they create them, the doctor wondered.

A nearly 100-year-old company likely endured due to a pretty innovative crew, Travis surmised. They obviously had managed to adapt with the times. They’d certainly give the latest challenge a try.

The crew met with the doctor, received a sample gown, and, using die cut technology was able to create a prototype. The doctor approved, and production began. When staff members at another hospital heard about the gowns, they also wanted to make an order. They had a request for the gowns to be folded a certain way for quick access. Odee employees made it work. 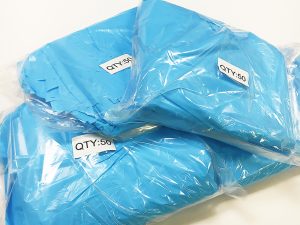 Soon, they were receiving requests for 35 to 40 thousand pieces per day—far more than Odee could handle. A story about their efforts on Dallas’ KDFW-TV news resulted in new partners for the production work.

Travis was pleased to help the healthcare workers, and the new line of production also means work remains in full swing at Odee. “Assisting the doctors and nurses on the front lines of the pandemic is important,” Travis said. “This effort also allows us to keep our employees working and able to continue to feed their families. It means a lot to be able to do that. “

Travis Stein graduated from Austin College with majors in business administration and exercise & sport science on May 21, 2001. He began work two weeks later at Odee. Now a principal and co-owner, he is helping the firm adapt into the future.