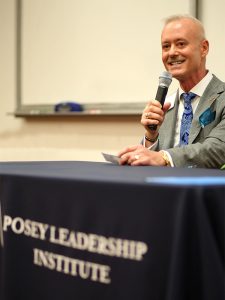 Pounders said that although many medical puzzles exist today, nothing is comparable to the onset, spread, stigma, and social response to HIV and AIDS in the early ’80s.

Today, HIV treatment is less about morals and more about science, Pounders said. “Science breaks through the stigmas and science changes. What is true in science today will no longer be true in the future,” he said.

In his talk he explained how research and the resulting medicines have tamed the disease from epidemic proportions to a manageable condition today. “It is expensive to develop and introduce new medicines,” he said. “Money is one of the things that holds back progress.” Pounders said that since 2004 with the available treatment, many patients have undetectable virus levels and continue with normal, healthy lives.

Pounders worked with scriptwriters of the 2013 film The Dallas Buyers Club, regarding his real-life patient Ron Woodruff, played by Matthew McConaughey in the film. Woodruff was diagnosed with HIV/AIDS in the mid-1980s when the disease was highly stigmatized and treatment was difficult to get. Pounders said that McConaughey portrayed Woodruff much like he was, though a few “twists” had been added to the story. The physician’s role inspired by Pounders, for example, was played by Jennifer Garner.

After more than 30 years supporting the LGBTQ+ community and in private practice, Pounders says he was able to work through the high death rate of patients in the early years of HIV/AID. “I knew I was doing something about it, and that gave me peace,” he said. “It helped me feel passionate about my profession.”

Austin College, a private national liberal arts college located north of Dallas in Sherman, Texas, has earned a reputation for excellence in academic preparation, international study, pre-professional foundations, leadership development, committed faculty, and hands-on, adventurous learning opportunities. One of 40 schools profiled in Loren Pope’s influential book Colleges That Change Lives, Austin College boasts a welcoming community that embraces diversity and individuality, with more than 50 percent of students identifying as persons of color. The residential student body of approximately 1,300 students and more than 100 expert faculty members allow a 13:1 student-faculty ratio and personalized attention. Austin College is related by covenant to the Presbyterian Church (USA) and cultivates an inclusive atmosphere that supports students’ faith journeys regardless of religious tradition. Founded in 1849, the College is the oldest institution of higher education in Texas operating under original name and charter.