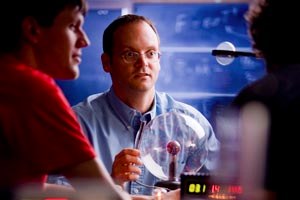 David Baker, chair of the Austin College Department of Physics, takes teaching to extremes—extreme places that is. The physicist and his colleague Todd Ratcliff, planetary geophysicist at NASA’s Jet Propulsion Laboratory, have written The 50 Most Extreme Places in Our Solar System.

In connection with the book’s release this month, Baker will present an interactive lecture and book signing from 4:30 to 6 p.m. on September 7 at Austin College in Hoxie Thompson Auditorium of Sherman Hall. The book, published by Harvard University Press and available in bookstores and online for $27.95, will be available for purchase at a 20 percent discount at the lecture. The lecture is free and open to the public.

“Todd and I discovered fascinating things when researching this book—like lightning bolts on Earth are only the thickness of a banana, while superbolts produced during thunderstorms on Saturn may be as wide as the Eiffel tower,” Baker said. “Writing this book restored our sense of wonder by reminding us just how strange, exotic, and beautiful our sun, its eight planets (sorry, Pluto), many planetoids, and rocky asteroid belt really are.”

Written for readers of diverse age and knowledge base, The 50 Most Extreme Places in Our Solar System explores extreme regions on Earth and beyond—giant turbulent storms, explosive volcanoes, and the possibility of life surviving in harsh conditions.

Illustrated with explanatory figures and NASA photographs, the book fuses the human fascination with extreme natural events and the allure of outer space by reporting new scientific discoveries and presenting images from NASA’s most recent observations.

“Recent Princeton Review rankings list the Austin College faculty 14th in the nation for academic excellence, and David Baker is representative of the level of esteemed professors at the College,” said Dr. Marjorie Hass, president of Austin College. “We are proud of our brilliant professors like David who are passionate about sharing their work with students and making cutting-edge science a part of everyday studies.”

Baker’s research of the galaxy began as a graduate student at the University of California, Los Angeles where he completed a master’s degree and a Ph.D. in geophysics and space physics. He since has studied the atmospheres of Earth, Venus, Jupiter, and Mars. He began postdoctoral research in atmospheric dynamics at NASA Goddard Space Flight Center in 1997. Since joining the Austin College faculty in 2000, he has continued his research with colleagues at Goddard and has been a frequent visitor to NASA’s Jet Propulsion Laboratory where he has conducted research on Martian dust devils and other extreme phenomena in the solar system. Baker has successfully launched high-tech weather balloons in the Marshall Islands to collect meteorological data for NASA’s Tropical Rainfall Measuring Mission weather satellite.

Baker also has excelled in the classroom, where his teaching interests include traditional physics courses as well as interdisciplinary courses in earth, environmental, and planetary sciences. He said he is interested in innovative techniques in learning and includes activity-based projects in his courses, such as the Austin College Weather Station, which provides hands-on experience with environmental issues in North Texas. He routinely leads adventure-oriented science courses to remote places in Patagonia, New Zealand, Hawaii, Australia, Peru, and the Galapagos during the Austin College January Term—courses that are among the most popular during the month-long academic session.

The Austin College presentation is just one stop for the author. Baker and Ratcliff will hold a book signing from 6:30 p.m. to 8:30 p.m. on Friday, September 17, at Borders in Allen, Texas. Book signings also are scheduled on April 2 and 3 in Washington, D.C., at the Smithsonian Udvar-Hazy Center and Smithsonian National Air and Space Museum, respectively.

For more information and to purchase The 50 Most Extreme Places in Our Solar System, visit www.extremesolarsystem.com.

Austin College is a leading national independent liberal arts college located north of Dallas in Sherman, Texas. Founded in 1849, making it the oldest institution of higher education in Texas operating under original charter and name, the college is related by covenant to the Presbyterian Church (USA). Recognized nationally for academic excellence in the areas of international education, pre-professional training and leadership studies, Austin College is one of 40 schools profiled in Loren Pope’s influential book Colleges that Change Lives.