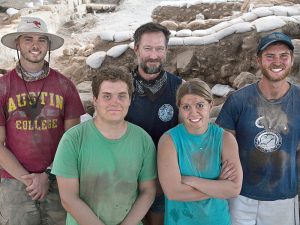 Dr. Martin Wells, Austin College assistant professor of classics, has recently completed his fourth year as the architectural specialist at the Huqoq Excavation Project in Israel. This year, working with a team of specialists and students led by University of North Carolina at Chapel Hill professor Jodi Magness, Wells and the group have uncovered an unparalleled range of scenes decorating the mosaic floor of the fifth century synagogue at Huqoq, an ancient Jewish village in Israel’s Lower Galilee.

In the last three years, Wells has taken Austin College students for the month-long season which runs from May 27 to June 27. This year, recent graduate John Huggins ’19 traveled to Huqoq for the third time, John T. Haynes ’20 completed his second trip, and Emily Dillon ’22 and Christian Hallum ’22 participated in the architectural dig for the first time.

In addition to working in the field six days a week, the students attended lectures by the excavation staff on stratigraphy, architecture, pottery, wall paintings, paleobotany and site conservation. They also went on field trips to archaeological sites in the Galilee and northern Israel and took a long field trip to the Judean Desert where they swam in the Dead Sea and visited King Herod’s palace at Masada.

This was the ninth season of the Huqoq excavations; and Magness and Assistant Director Shua Kisilevitz of the Israel Antiquities Authority and Tel Aviv University, focused on the northwest part of the synagogue, where new mosaics were exposed.

Panels in the north aisle frame figures of animals that are identified by an Aramaic inscription as the four beasts representing four kingdoms in the biblical Book of Daniel. The inscription preserves the reference to the lion, the first of the beasts (Daniel 7:4). The second figure is Daniel’s second beast: a bear with three ribs protruding from its mouth (Daniel 7:5). Also represented is the fourth beast, described in Daniel 7:7 as having iron teeth. Daniel’s third beast, a leopard, is not preserved. These panels together with another one uncovered in the north aisle in 2018 which apparently depicts the three youths in the furnace, also from the Book of Daniel, point to an eschatological theme in some of the synagogue mosaics.

A large panel in the west aisle is divided into three horizontal strips containing rows of date palms. In the upper and lower strips, clusters of dates are being harvested by male agricultural workers wearing loin cloths, who are sliding the dates down ropes held by other men. This is the first depiction of the episode of Elim ever discovered in ancient Jewish art. An adjacent panel previously uncovered in the nave shows the parting of the Red Sea, in which Pharaoh’s soldiers are being swallowed by giant fish, suggesting that the exodus from Egypt is another theme of the synagogue’s mosaics.

“The richness and diversity of biblical stories and other scenes depicted in the Huqoq mosaics is unparalleled,” said Magness. “They shed light on the way in which Galilean Jews in the later Roman period understood the biblical text.” 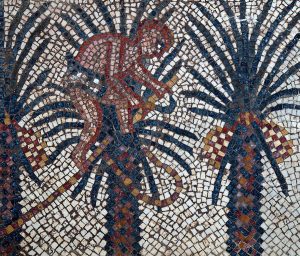 Mosaics were first discovered at the site in 2012, and work has continued each summer since then. The mosaics uncovered in the east aisle include panels depicting Samson and the foxes (Judges 15:4); Samson carrying the gate of Gaza on his shoulders (Judges 16:3); a Hebrew inscription surrounded by human figures, animals and mythological creatures including cupids; and the first non-biblical story ever found decorating an ancient synagogue — perhaps the legendary meeting between Alexander the Great and the Jewish high priest.

The mosaic floor in the north aisle is divided into two rows of panels containing figures and objects accompanied by Hebrew inscriptions identifying them as biblical stories. One panel depicts two of the spies sent by Moses to explore Canaan carrying a pole with a cluster of grapes, labeled “a pole between two” (Numbers 13:23). Another panel showing a man leading an animal on a rope is accompanied by the inscription “a small child shall lead them” (Isaiah 11:6).

The mosaics in the nave include panels portraying Noah’s Ark; the parting of the Red Sea; a Helios-zodiac cycle; Jonah being swallowed by three successive fish; and the building of the Tower of Babel.

“In addition to the diverse range of biblical scenes decorating the mosaic floor, the synagogue’s walls and columns were covered with colorful painted plaster, some of which has survived intact. Almost no examples of painted plaster still adhering to columns or walls are preserved in other ancient synagogues in Israel,” Magness said.

Sponsors of the project are UNC-Chapel Hill, Austin College, Baylor University, Brigham Young University and the University of Toronto. Students and staff the consortium schools participated in the dig. Financial support for the 2019 season was also provided by the Kenan Charitable Trust and the Carolina Center for Jewish Studies at UNC-Chapel Hill.

The mosaics have been removed from the site for conservation, and the excavated areas have been backfilled. Excavations are scheduled to continue in summer 2020. For additional information and updates, visit the project’s website.

Austin College, a private national liberal arts college located north of Dallas in Sherman, Texas, has earned a reputation for excellence in academic preparation, international study, pre-professional foundations, leadership development, committed faculty, and hands-on, adventurous learning opportunities. One of 40 schools profiled in Loren Pope’s influential book Colleges That Change Lives, Austin College boasts a welcoming community that embraces diversity and individuality, with 46 percent of students identifying as persons of color. The residential student body of approximately 1,300 students and more than 100 expert faculty members allow a 13:1 student-faculty ratio and personalized attention. Austin College is related by covenant to the Presbyterian Church (USA) and cultivates an inclusive atmosphere that supports students’ faith journeys regardless of religious tradition. Founded in 1849, the College is the oldest institution of higher education in Texas operating under original name and charter.