This graphic released by NOAA’s severe storms laboratory illustrates the factors that combine to create “tornado alley.” Click the image for more information.

Storms this week spawned twisters from Kansas to Texas, devastating communities and killing hundreds. Tornadoes, dramatic weather events that have been the subject of action movies and reality-TV science shows, seem to come out of nowhere.

“Tornadoes are very rare, and violent tornadoes are even more rare,” he said. “Most thunderstorms don’t even have the possibility of tornadoes developing.   It takes a special set of ‘ingredients’ for tornadoes to form.”

When they do form, they can be costly.

“The five most expensive tornadoes to date cost between $1 and 1.5 billion,” Kevin Simmons, professor of economics, said. “But what happened in Joplin, Missouri, and Alabama and Mississippi is likely to top those top five. The damage in Alabama/Mississippi is up to $6 billion and the damage in Joplin will be up to $3 billion. We could be looking at a tornado season that tops $10 billion in damages.”

He co-authored Economic and Societal Impacts of Tornadoes, and is an expert on the costs related to tornadoes and tornado warnings. 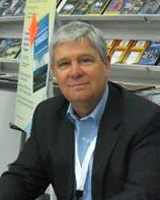 “We had all of those ingredients,” he said.

He said all thunderstorms require the basic components of moisture, instability, and lifting to come into being.

Moisture in the air, often in the visible form of clouds, is the first step. By instability, Baker means hot air near the surface with cooler air on top, rather than a consistent, steady temperature.

“The third thing is some way to get the party started—that is, the hot air near the surface wants to rise, but it needs a little kick-start,” Baker said. That “lifting” in North Texas often comes in the form of a cold front, which forces the hot and cold air onto a collision path.

But for a storm to create a tornado, there needs to be two other factors: wind shear—differing wind speeds near the surface and higher in the atmosphere—and a “cap”—a section of air between the hot and cool areas which keeps the two from mixing.

Wind shear is like a rolling log, Baker said. “To get a log to start rolling, you would push your foot against the top; that would be analogous to the winds at the top pushing the storm faster than it is moving near the bottom.” Wind shear forces the air to roll, and if a lifting element, like a cold front, is added, “it can ‘tip’ one side of the ‘log’ up into the atmosphere, making that turning roll go from horizontal to upright, creating a rotating storm.”

Once the storm begins to rotate, if the “cap” of air breaks, the resulting trapped energy can be explosive, creating a rotating supercell thunderstorm and possibly tornadoes.

Because all of those ‘ingredients’ were present on Tuesday, the National Weather Service issued a series of watches and warnings.

“A watch covers a broad area; it means that conditions are ripe for a tornado to form,” Baker said. “A warning means that either a tornado has been spotted on the ground, or that through Doppler radar there is an indication of very strong rotation even if a tornado cannot be confirmed visually.”

This week’s storm in north Texas produced a large swell of tornadoes, but not all the warnings resulted in a twister on the ground.

“Scientists are studying the exact conditions to determine why a tornado forms in one area but not in another,” he said. “The necessary ingredients were there, but were not sufficient in many locations.”

Effects of a disaster

Economist Simmons has extensively studied the cost-benefits of early-warning tornado sirens. His research showed that warnings were effective in reducing fatalities, optimally if they are given within 5 to 15 minutes of a tornado’s strike.  For longer or shorter warning times, people remain at risk.

And when there are a string of false alarms, people start to doubt the veracity of the warnings.  But the recent major tornado activity this year has had a psychological effect on people in tornado alley.

“People get complacent when nothing happens, but after hundreds of people are killed, people take it seriously,” Simmons said.

“Warnings have been immensely effective in the last 50 years in reducing casualties,” he said. But the recent tornadoes have been different. “These have been very large, and long track, staying on the ground for 50-60 miles. If that is heading for you, a warning did you little good.”

He said some researchers and policymakers are considering issuing limited evacuations for tornadoes with at least an hour of warning.

But Simmons says there is a problem with that plan, too. “If you told everyone ‘get in your car and run,’ you’d have a traffic jam, and potentially more lives lost than if you’d told them to stay in their homes,” he said. That, combined with the negative effects associated with false alarms, makes evacuations a risky choice.

“Maybe a storm like this shows us the limits of our technology—a warning can only do so much,” he said. “The only way to be safe is to have an engineered safe room.”

He recommends getting as close to the ground as possible, and, if you live in a mobile home, leaving for a safer environment. Baker also recommends taking cover in an interior room, often a bathroom, which has stronger walls because of the pipes.

Both agreed that there is no way to predict the size and potential for danger from a tornado before it hits, so it is always better to assume the worst.

“Only 1% of all tornadoes are EF4 or EF5 on the intensity scale,” Baker said. “EF4 tornadoes have wind speeds over 166 mph, and EF5 twisters exceed 200 mph.  All walls in a residential home completely collapse when hit by these twisters.  Although most tornadoes aren’t this violent, you should treat all tornado warnings very seriously.”