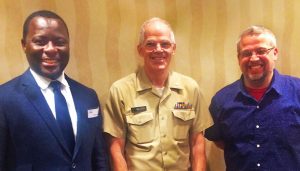 Tuberculosis is one of the world’s deadliest diseases, according to the Centers for Disease Control and Prevention. The center’s data shows that in 2017, 10 million people were infected with TB and 1.3 million died of TB-related disease.

In the U.S., TB control and its ultimate elimination are a core part of public health policy, a topic Dr. Mathias Akuoko, Austin College assistant professor of public health, knows well. Though public health issues and health policy often go unseen, they drive much of the nation’s health and the substantial protections against the worldwide pandemic of TB.

Akuoko recently traveled to Atlanta, Georgia, to take part in work with the U.S. Centers for Disease Control and Prevention to help ensure health security for all Americans.

During a three-day meeting of CDC’s Tuberculosis Trials Consortium (TBTC), Akuoko learned about treatment and vaccine research currently underway, met CDC and research leadership from around the U.S. and the world, and took part in discussions with TB researchers on how the trials might be expanded into sites in Ghana and elsewhere.

Akuoko was hosted at the meeting by Dr. Thad Miller of the University of North Texas Health Science Center faculty and a long-time CDC collaborator. “When I was tasked with considering an international clinical trials site, I immediately reached out to Mathias,” Miller said. “I’ve known him for years, and wanted his guidance as we considered Ghana for the site.”

Miller notes that the TBTC has driven tremendous improvements in TB management in the U.S. and around the world in its 20 years. He said he looks forward to a growing partnership with Akuoko and Austin College as the work continues.

Akuoko’s background is in health management and policy, focusing on health disparities. His research areas include maternal and child health and access to care among minorities and immigrant populations. Akuoko earned a bachelor’s degree at Kwame Nkrumah University of Science and Technology in Ashanti, Ghana, then earned a master’s degree at Southern Illinois University and a second master’s degree and Ph.D. at the University of North Texas Health Science Center.

Akuoko became a member of the Austin College faculty in 2018 after serving in a visiting faculty role for two years. The College’s Public Health Program began enrolling students in the 2014-2015 academic year. Of the College’s 270 2019 graduates, 23 completed majors in the program and 6 completed minors, making it one the largest in numbers of graduates, according to Dr. George Diggs, co-director of the program. The program had ranked fifth in number of graduates in 2017 and 2018. Akuoko’s students participated in a January Term trip to Ghana in study of “Health Education & Culture in Ghana.” This spring he taught “Leadership and Legislative Experience,” which included spending spring break in Austin observing and working with the Texas State Legislature on public health policy and related topics.