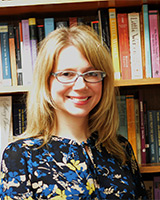 Dr. Randi Tanglen, associate professor of English at Austin College, will present the lecture “Female Life Among the Mormons: Captivity Narratives, Anti-Mormon Prejudice, and American Literary History” on Wednesday, April 6 at 4:30p.m. in Wright Campus Center, Room 231. A 4.pm. reception will precede the presentation. Both the reception and the lecture are free and open to the public.

Female Life Among the Mormons by Maria N. Ward was published in 1855 and put into several editions, eventually selling 40,000 copies. This sensationalized novel set in Utah Territory was one of twenty-seven anti-Mormon polygamy novels written by American women writers between 1855 and 1903.

Professor Tanglen will discuss the research she conducted in the special collections at the Harold B. Lee Library while she was a visiting scholar at the Charles Redd Center for Western Studies at Brigham Young University in Provo, Utah. She is one of just a handful of scholars to examine popular anti-Mormon novels from the 1800s and their influence on American authors and literary themes during this time period.

The lecture is presented by Austin College’s Robert and Joyce Johnson Center for Faculty Development and Excellence in Teaching, directed by Tanglen. Within the mission of the center is the encouragement of “bold exploration of intellectual frontiers” and “fostering lively intellectual dialogue within and across academic disciplines.”

Austin College, a private national liberal arts college located north of Dallas in Sherman, Texas, has earned reputation for excellence in academic preparation, international study, pre-professional foundations, leadership development, committed faculty, and hands-on, adventurous learning opportunities. One of 40 schools profiled in Loren Pope’s influential book College’s That Change Lives, Austin College boasts a welcoming community that embraces diversity and individuality, with more than 36 percent of students representing ethnic minorities. A residential student body of 1,250 students and a faculty of more than 100 allow a 12:1 student-faculty ratio and personalized attention. The College is related by covenant to the Presbyterian Church (USA) and cultivates and inclusive atmosphere that supports students’ faith journeys regardless of religious tradition. Founded in 1849, the College is the oldest institution of higher education in Texas operating under original name and charter.