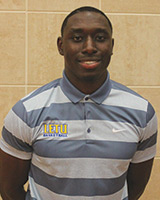 Ransom Okpala ’14 remembers being on the B team.

“I come from a very big family and I’m the oldest of seven,” Ransom said. “When you’re in a big family, everyone wants to find their niche. You want to be different and find something you’re good at.”

“In seventh grade I was on the A team in basketball. But in eighth grade I was on the B team. That lit a fire in me to get better,” Ransom said. “Then as I developed from eighth to ninth grade, I spent the summer training, and it led me to my craft. People would say, ‘you’re so much better!’ but I knew it was the training.”

Ransom played basketball at Austin College for four years, served as team captain for three, and was named to the All-SCAC team more than once. After earning his bachelor’s degree in finance and economics, he worked in Katy, Texas, as a business analyst and then an inside sales manager. But, he has known since he was very young that basketball was his “thing.”

Read more about our Alumni Coaches!