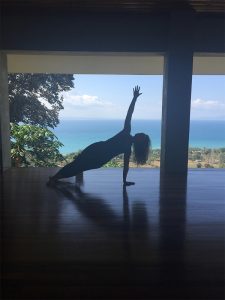 Dr. Renee Countryman, Austin College associate professor of psychology, will speak on “Unexpected Directions: How a personal adventure in Yoga found its way into the classroom” on Wednesday, September 27, at 5 p.m. in Mabee Hall of Wright Campus Center. A 4:30 p.m. reception, also in Mabee Hall, will precede the lecture. The events, sponsored by the Johnson Center for Faculty Development and Excellence in Teaching, are free and open to the public.

Countryman will speak about her sabbatical experiences in Spring Term 2016. She had expected to spend the months of her sabbatical caring for her mother, who had terminal lung cancer, and perhaps completing some professional writing. However, her mother died a few months before the sabbatical began. Countryman came across a course that combined her love of Yoga with a beautiful peaceful place in which to begin to heal from the loss of her mother. She signed up for a 200-hour yoga teacher-training program at the Pavones Yoga Center in Pavones, Costa Rica, a highly remote and sparsely populated area on the southern Pacific coast known for its surfing.

“Since completing the program, I have worked hard to make Yoga a part of my life, and to share my Yoga with as many other people has possible,” Countryman said. She has since created a Communication/Inquiry class for incoming freshmen called “The Science and Practice of Yoga and Meditation” and a January Term 2018 course entitled “The Neuroscience Behind Nature, Yoga, and Meditation,” which will be held in Costa Rica. She wants students to see not only that Yoga can help them become less stressed but also how yoga practice can affect thought processes.

Countryman also has begun a yoga program at Austin College for staff and faculty and returned to Costa Rica during summer 2017 as an instructor. She plans to continue to read in the field of yoga and neuroscience and to conduct some research in the area over the next few years.

The lecture is presented by Austin College’s Robert and Joyce Johnson Center for Faculty Development and Excellence in Teaching, directed by Randi Tanglen, associate professor of English. Within the mission of the center is the encouragement of “bold exploration of intellectual frontiers” and “fostering lively intellectual dialogue within and across academic disciplines.”