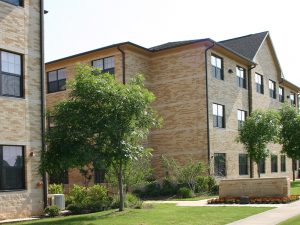 In the suite-style residences, four students, each with a separate lockable bedroom, live in a 1,200-square-foot unit that includes two bathrooms, a common living area, and a kitchenette. All rooms are equipped with wired and wireless networks.

Commonly known as ’Roo Suites upon construction in 2003, the Board of Trustees named the suites for the Johnsons during its March 2005 meeting. Bob and Joyce wanted ’Roo to remain in the title so it was dedicated as the Robert M. and Joyce A. Johnson ‘Roo Suites.