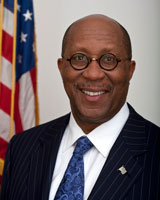 Kirk is a 1976 graduate of Austin College and a member of the College’s Senior Board of Trustees. After graduating from Austin College, Kirk earned a law degree at the University of Texas Law School. He has worked in law and politics since then, serving as a legislative aide to U.S. Senator Lloyd Bentsen, a City of Dallas assistant city attorney, Texas Secretary of State, mayor of Dallas, a partner at Vinson & Elkins law firm, U.S. Trade Representative under President Barack Obama, and now, Senior Of Counsel in the Dallas and Washington, D.C., offices of Gibson, Dunn & Crutcher.

Kirk has been recognized by a number of state and national organizations during his career, including being named one of “The 50 Most Influential Minority Lawyers in America” by The National Law Journal in 2008, and one of the nation’s top government relations lawyers by The Best Lawyers in America from 2007 to 2009. He also received a University of Texas Distinguished Alumni Award in 2001, Woodrow Wilson Center for Public Policy’s Outstanding Public Service Award in 2000, the Young Texas Exes Award in 1995, and the Austin College Distinguished Alumni Award in 1994. He also received an honorary Doctor of Humane Letters degree from Austin College in 2006 and the Mickey Leland Leadership Award from Texas Southern University in 2004.

The Williams Executive-in-Residence Lecture was established in 2007 by Austin College alumnus Todd Williams, Class of 1982.

Austin College is a leading national independent liberal arts college located north of Dallas in Sherman, Texas. Founded in 1849, making it the oldest institution of higher education in Texas operating under original charter and name, the College is related by covenant to the Presbyterian Church (USA). Recognized nationally for academic excellence in the areas of international education, pre-professional training, and leadership studies, Austin College is one of 40 schools profiled in Loren Pope’s influential book Colleges That Change Lives.