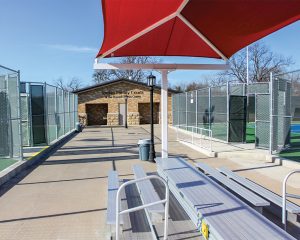 Jordan Family Courts at the Russell Tennis Center, built in 2007, is located on the north end of campus alongside other campus athletic fields.

The original Russell Tennis Stadium was built in 1974 with gifts from Mrs. Elizabeth Halsell Russell, a Sherman resident and a member of the Austin College Board of Trustees. The center was dedicated in conjunction with the 125th anniversary of Austin College and the first game on the court was played by college trustee and actress Ginger Rogers. She and trustee Ira Anderson played a doubles match with faculty Gene Day and Frank Edwards.