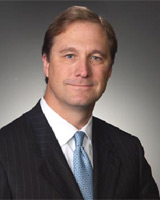 Todd Maclin is the chief executive officer of the Commercial Bank at J.P. Morgan Chase & Co. and serves as a member of the firm’s Operating and Executive Committees. J.P. Morgan Chase is one of the world’s largest financial institutions, and its Commercial Bank franchise, collectively consisting of five business units, is the second largest in the United States with a presence in 17 markets and more than 25,000 customers.

Prior to leading the Commercial Banking organization, Maclin ran the National Middle Market banking group at JPMorgan Chase and served as chairman and chief executive officer of the Texas Region. He also is a member of the J.P. Morgan Chase Foundation Board. Earlier in his career, Maclin held a progressive series of management positions at J. P. Morgan Chase and its predecessors — Chemical Bank and Texas Commerce Bank. He joined the organization in 1980.

An active member of the business community, Maclin has served on the executive committee and board of directors of the Greater Dallas Chamber, as an advisory director of the Export-Import Bank of the United States, and as an advisory member of the National Petroleum Council. He is a director of the Private Export Funding Corporation, a national trustee for the Boys and Girls Clubs of America, and member of the Advisory Council for The University of Texas at Austin McCombs School of Business. He is a member of The Financial Services Roundtable in Washington, D.C., and the World Presidents Organization.