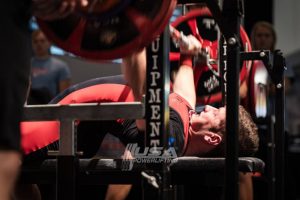 When Seth Howard’s name was called over the loud speaker as a Homecoming king nominee a few weekends ago during the football game’s halftime, an empty space was left on the field alongside the other members of the Homecoming court.

Seth, a senior from Denton, Texas, was nowhere near Apple Stadium at the time. Instead, he was in Panama City, Panama, competing in the North American Powerlifting Federation’s 14th North American Regional Bench Press Championships as a member of the USA Powerlifting team (USAPL). He received that invitation based on his finish in the 2018 Bench Press Nationals.

The USA team returned from Panama with a victory in both the men and women’s divisions. A major catalyst in the competition was Austin College’s own Seth Howard.

Seth earned Gold in the 74kg junior division and broke the NAPF 74kg junior bench press record. In the 74kg open division, Seth earned Silver and walked away with the title of Best Overall Junior Lifter and National Champion. 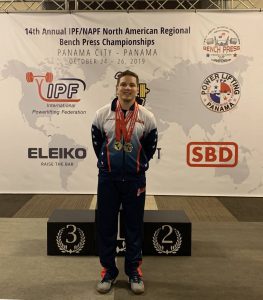 That finish is even more impressive when considering that Seth’s first powerlifting competition was less than two years ago. The next year, 2018, he entered the USAPL Collegiate Nationals as an individual and placed 39th in the 75kg collegiate class. Later that year, Seth placed 2nd in the 74kg junior class and 3rd in the 74kg open class at the USAPL Bench Press Nationals. That earned him a spot on the USA National Team.

Up Next: The Bench Press World Championship May 16-23, 2020, in Pilsen, Czech Republic, on the USA National Team. Unfortunately, Austin College graduation is May 16, the first day of the competition around the world. Seth will have to miss the Commencement exercises but plans to come back to campus in June to receive his diploma and handshake from Austin College President Steven O’Day. That is special to him, and he doesn’t want to miss that. 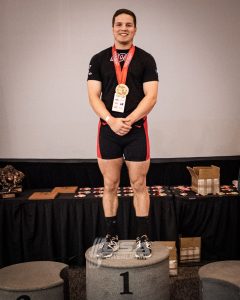 Seth had played baseball as a freshman at Austin College and some football in high school. Over time, he realized that he enjoyed the weight room preparation more than other aspects of practice. He decided to try powerlifting as he had done the basic lifts in his sports workouts. His home gym included competition-level equipment and his roommate worked out with him. They motivated one another. The rest, as they say, is history. Seth is trying to set up a powerlifting club at Austin College. He might be too busy competing to get it going.

He has plenty going on outside the weight room. The senior is completing majors in economics and finance. He is the head tutor in the College’s Academic Skills Center, was a 2019 TEDxAustinCollege presenter, and is vice president of Student Assembly. And he is a member of the 2019 Homecoming court. The king was on hand to accept his crown from President O’Day. Seth was receiving his honors elsewhere.