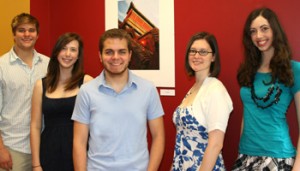 Five Austin College graduating seniors and a 2009 graduate were awarded Fulbright grants this spring and will spend the next academic year teaching English internationally. The students are among 1,500 U.S. citizens who will travel abroad for the 2011-2012 academic year through the Fulbright U.S. Student Program.

Selection for the program emphasizes leadership potential, academic, and professional excellence, and commitment to mutual understanding.

The Fulbright English Teaching Assistant (ETA) Program, a component of the Fulbright U.S. Student Program, places U.S. students, primarily new college graduates, as English teaching assistants in schools or universities overseas, where they increase foreign students’ English language abilities and knowledge of the United States. They are integrated into the host community, which improves their own foreign language skills and knowledge of the host country. 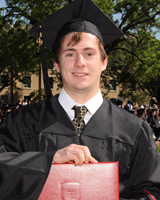 Miles Vaughn, a 2009 graduate who completed majors in economics and Spanish, will teach English in Colombia. Since graduation, he has worked with Teach For America, teaching at Capitol High Academy in Baton Rouge, Louisiana.

“Austin College is one of the top three Fulbright-producing institutions per capita in Texas,” said Patrick Duffey, Austin College Fulbright program advisor. “The fact that we have five students who have been awarded English teaching assistantships is a reflection of our strength in international education and foreign language education. For many years, our students have studied abroad and have studied many foreign languages on campus. The range of destinations of these students reflects the real diversity in the interests of our students.”

Six Fulbright awards is the most awarded to Austin College students in one year. “This record number of awards here this year also indicates how we at Austin College help our students to succeed at the national and international level and to develop the critical thinking and writing skills that help them to win prestigious awards,” Duffey, dean of Humanities and professor of Spanish, explained.

The Fulbright Program, the flagship international educational exchange program sponsored by the U.S. government, is designed to increase mutual understanding between the people of the United States and the people of other countries. Recipients of Fulbright grants are selected on the basis of academic or professional achievement, as well as demonstrated leadership potential in their fields. The program operates in over 155 countries worldwide.