Several Austin College students have received news of significant national scholarship awards for 2018-2019. The applications alone require tremendous amounts of work and most programs require interviews and additional steps along the way. Faculty representatives, too, are quite involved in recommendations and mentoring students through the application process so the awards are cause for celebration across campus.

Lauren K. McCaskill ’18 and Kenneth Bailey Page ’18 have been awarded Fulbright English Teaching Assistantships and will spend the 2018-2019 academic year in Malaysia. 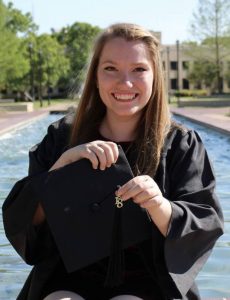 McCaskill chose Malaysia because she is interested in its placement in current geopolitical issues and wants to learn more about how United States policies affect its people.

“I am curious to see how Muslim countries in Southeast Asia are viewed in comparison to the Middle East and North Africa region, and how it affects them,” she wrote in her Fulbright application.

As an international relations major, Lauren has special interest in world policy and politics, and a personal interest in language study. “Every class I’ve taken has taught me so much about the inner workings of the systems that surround us, while opening my eyes to how much we don’t know or don’t understand about other places and the people who live there,” McCaskill says. She spent a semester in study abroad in Morocco and enjoyed a month of French language immersion while living and working on a farm in France.

Serving as a Fulbright English Teaching Assistant, McCaskill expects to learn about Malaysian culture and hopes to use that to inspire children to stay in school and retain their knowledge of English. While at Austin College, she frequently has volunteered with organizations that support women and children; she hopes to carry that experience forward into Malaysia.

McCaskill is regularly named to the Austin College Dean’s List and is a member of several academic honor societies, including Phi Beta Kappa and Alpha Chi. 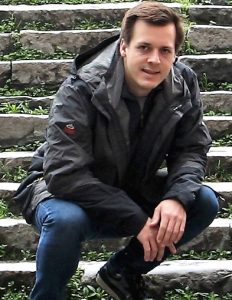 s he embraces the diverse religions, cultures, and languages of the people.

Completing majors in philosophy and political science, Page has been engaged in Austin College community life as a resident assistant, a Sallie Majors Religious Life Intern, and a member of Chi Tau Chi fraternity. He also has served as a youth director at a Sherman-area church and a counselor at a summer camp.

In his Fulbright application, Page wrote, “I have no doubt that by the end of my time there I will have gained a great many friendships and, along the way, will have developed a new and greater understanding of Malaysian culture, of cross-cultural relationships, and of my place in the world.”

He hopes to use his experience as poetry editor of Suspension, the Austin College literary magazine, to help Malaysian students develop a website of short stories and original literary works. And, he expects his experience in soccer will serve him well as a tool to connect with the community members where he will serve.

“Soccer presents an opportunity to communicate and build relationships in a way that supersedes language and culture. I would like to get involved in a school soccer program and hopefully even play with a local team,” he said.

Audrey Rose ’18 was selected as an alternate for Fulbright ETA in Spain.

The Fulbright Program is the flagship international educational exchange program of the United States. These awardees represent the United States as a cultural ambassador helping to enhance mutual understanding between Americans and the people of the world. More than 100,000 Fulbright U.S. Student Program alumni have undertaken grants since the program began in 1948. This year, the Fulbright U.S. Student Program received over 10,000 applications. 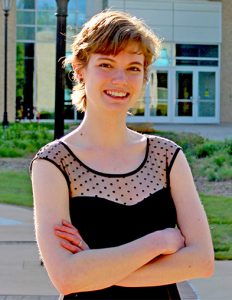 AnnaBeth Thomas ’19 is the first student from Austin College known to receive the prestigious and highly competitive Goldwater Scholarship for students pursuing research careers in the fields of mathematics, natural sciences, and engineering.

AnnaBeth, completing majors in chemistry and environmental studies, has conducted three semesters and one summer of research at Austin College, and a renewable energy exploration at University of Wisconsin-Madison. This summer, she will chemically analyze mussels from the ocean in an environmental chemistry internship at Pacific Northwest National Lab in Richland, Washington.

“As a self-supporting student, the Goldwater Scholarship will help me very much with funding the remainder of my time at Austin College,” she said. “This scholarship will allow me to spend less time working and more time focusing on my academics and my honors thesis with Dr. Andrew Carr in the Chemistry Department.”

She presented her research at the Austin College Student Scholarship Conference in March. “Coming into Austin College, I wanted to be a chemistry major but I intended to ultimately conduct some kind of medical research after my undergraduate work. After taking “Inorganic Chemistry” with Dr. Brad Smucker, Biology 115 (“Evolution, Behavior, and Ecology”) with Dr. Peter Schulze, and “Fundamentals of Environmental Studies” with Dr. Mari-Elise Ewing during my freshman year, I realized that I wasn’t very interested in medicine; chemistry in an environmental context became my new, and lasting, passion.”

The Barry Goldwater Scholarship is a highly competitive national award presented on the basis of academic merit to college sophomores and juniors who plan to pursue research careers in the natural sciences, mathematics, and engineering. The Goldwater Scholarship and foundation were established by Congress in 1986 to honor the work of Senator Barry Goldwater, who served his country for 56 years as a soldier and statesman, including 30 years in the U.S. Senate. 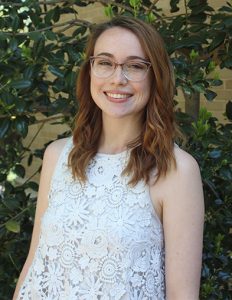 Caitlin A. Lucero ’20 has received a Boren Scholarship that will fund her 2018-2019 academic year studying in Shanghai at East China Normal University, through a program administered by International Studies Abroad.

Caitlin is completing majors in East Asian Studies and international relations. An Austin College Founders Scholarship recipient, she has been named to the Dean’s List each semester at the College and is a student assistant for the East Asian Studies program.

Boren Scholarships, an initiative of the National Security Education Program, are nationally competitive and provide opportunities for U.S. undergraduate students to study in world regions critical to U.S. interests and underrepresented in U.S. language study and study abroad, including Africa, Asia, Central and Eastern Europe, Eurasia, Latin America, and the Middle East. Boren Scholars agree to work in the federal government for at least one year after graduation.