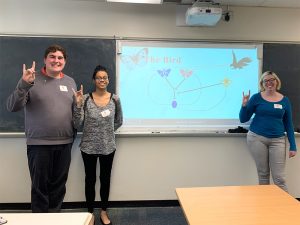 Three Austin College students received the highest possible team rating at a mathematical modeling competition at Texas A&M University–Commerce on November 10.  Presenting at SCUDEM IV 2019 (SIMIODE Challenge using Differential Equations), the Austin College team was one of only two to receive the Outstanding rating at the event.

Students used the power of mathematics to address the following challenges: chemical signals from wasps and butterflies, which relate to reproduction and egg deposits; the phenomenon of hipsters in how people tend to group themselves; and the movement of objects on small microgravity environments such as asteroids.

Dr. Catie Patterson, assistant professor of mathematics and computer science, accompanied the team to the competition, which included a faculty development program.

The event was sponsored by SIMIODE – Systemic Initiative for Modeling investigations and Opportunities with Differential Equations, a nonprofit organization, funded in part in the United States by the National Science Foundation.