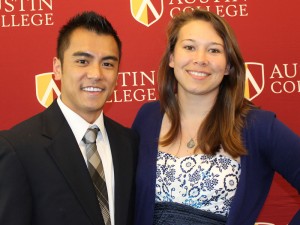 Top honors went to Outstanding Senior Man and Altrusa Outstanding Senior Woman Daryl McKee of Cooper, Texas, and Kim Cook of Coppell, Texas. These awards are presented to a graduating senior man and woman based upon their scholastic achievements and co-curricular involvement, including membership and leadership in student organizations, committees, or athletic teams and participation in performing arts, intramurals, and community service.

Darryl McKee is completing a major in biochemistry and a minor in math. He plans to apply to medical school in the future. He has a very busy Austin College schedule, including participation in Student Assembly, Peer Judicial Board, The Austin College Dance Club, Pre-Med Society, Alpha Phi Omega national service fraternity, Catholic Students Association, and Zeta Chi Beta fraternity. He is the son of David and Elsie McKee.

Outstanding freshman honors went to Kevin Graham of Frisco, Texas. The Outstanding Freshman is chosen after solicitation of nominations from faculty, staff, and student leaders. The nominees then are sent an invitation to apply and a committee reviews the applications to make a final selection. In announcing the freshman, President Marjorie Hass said, “This freshman student jumped in with both feet to life at Austin College—involved with the H.E.A.T organization, Campus Activities Board, Black Expressions, Great Day of Service, and varsity basketball. He says his freshman year has taught him how to deal with many personalities and learn the good things that can come from being around different people.” Kevin is the son of Yolanda Robinson and Kevin Graham.

Senior Coral Kennelty-Cohen of Long Beach, New York, was named the Oscar C. Page Servant of the Year based upon her commitment to community service on campus and in the community. The award honors Austin College President Emeritus Oscar Page (serving 1994–2009) for his emphasis on the values of servant-leadership and his example of volunteer efforts. Coral has been an active volunteer with the Sherman Animal Shelter, Hospice, Habitat for Humanity, Great Day of Service, the ACtivators youth ministry team, plus several smaller projects. She took part in a week-long Habitat for Humanity project in Alabama worked in a school and orphanage in Kenya. Coral logged more than 730 hours of service during her four years at Austin College, increasing her service each year. Coral is the daughter of Phil and Sharon Kennelty-Cohen.

Senior Samantha Matulis of Pittsburg, Texas, received the Henry Bucher Global Citizen Award based upon her service and study in a variety of cultural and international context and service to the Austin College campus community. This award honors Henry Bucher, chaplain emeritus and associate professor emeritus of humanities whose tenure at Austin College has been distinguished by consistent commitment to service and study in a global context. Matulis has been active in many aspects of the campus community. A member of the Posey Leadership Institute, she also has fulfilled several Student Assembly leadership roles, served on the ACtivators youth ministry team, served as an Admission campus tour guide, and been an outstanding student athlete as a leader on the College softball team. She also has given of her time to help women facing abuse in Sherman, refugees making the transition to the United States, and child soldiers in Uganda. Sarah is the daughter of Thomas and Lesia Matulis.

Junior Catherine Stodola of Cedar Hill, Texas, received the Robert Bradshaw Memorial Scholarship. Named to honor Bradshaw, a former vice president for student affairs for 10 years prior to his death, the award recognizes a rising junior or senior who has demonstrated exceptional leadership through involvement in co-curricular activities at Austin College. Stodola is active in Los Amigos, Habitat for Humanity, AC Cares, Pre-Med Society, A Cappella Choir, and ACtivators youth ministry team. She also is an admission tour guide for the College and a Service Station Board member. Catherine is the daughter of Eugenia and Mark Stodola.

Sophomore Alicia Mistry of McKinney, Texas, received the Goodloe Lewis Scholarship, established by ARAMARK to honor the long-time Austin College faculty and staff member. The award recognizes co-curricular leadership and involvement. Alicia has been involved with Habitat for Humanity, both at Austin College and at her high school, as well as serving in various campus roles for Student Assembly. She also has worked with the Admission Office as a tour guide and ACE leader and is a member of the Posey Leadership Institute and a Career Services Peer Educator. Alicia is the daughter of Ram and Judy Mistry.

Seniors Scott Straley of The Colony, Texas, and Ellen Kenzora of St. Louis, Missouri, were named the All-Campus Recreational Sports Champions. These awards, determined by the Recreational Sports officials, are selected based upon participation, success, and embodiment of the spirit of intramural sports. Scott is the son of Dave and Chrissie Straley. Ellen is the daughter of Joseph and Paula Kenzora.

Brent Butler, ARAMARK chef who retired earlier in April, received the Faculty/Staff Co-Curricular Support Award. The award recognizes a staff or faculty member that the Student Affairs Division determines has made significant contributions to student life outside the classroom. Butler had prepared meals for Austin College students for 15 years.

Student organizations also were recognized for achievements in scholarship and leadership on the campus and in the larger community. The Organizational Excellence Award went to the campus Habitat for Humanity chapter, whose 12 members have logged 305 hours of service in 20 service projects. The Greek Organizational Excellence Award went to Zeta Chi Beta fraternity. This year, the group’s 30 members have completed more than 20 service and philanthropy projects, completing 1,500+ service hours, and raising more than $3,000 for various charities and community partnerships. The members have a cumulative GPA of 3.18 and are involved in more than 40 student organizations collectively, including involvement in athletic teams. Zeta Chi Beta was founded on campus in 2008.

Jack Pierce, sponsor of the Pre-Medical Society, was named Outstanding Organizational Sponsor for significant contributions to the group. A professor of biology and Mary W. and Foster G. McGaw Chair of Health Sciences, Pierce has been a member of the Austin College faculty since 1967. He has served as the Pre-Med Society advisor for 20 years. Hank Gorman, sponsor of Alpha Delta Chi sorority, was named the E. Don Williams Outstanding Greek Sponsor. That award was named to honor Williams’ significant and long-term sponsorship of a campus Greek organization. Gorman, Herman Brown Chair of Psychology, has been a member of the faculty since 1973.

Who’s Who in American Universities and Colleges

Each year, junior, senior, and graduate students are selected for inclusion in Who’s Who in American Universities and Colleges. Students are selected on the basis of their cumulative grade point average and co-curricular involvement and achievements throughout their college career. Those achievements include membership in student organizations, college committees, or athletic teams; leadership positions in student organizations, governance bodies, or conduct council; and participation in performing arts, intramurals, and community service.