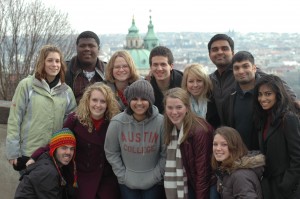 Delegates for this year’s Model UN traveled to the Czech Republic.

The 16 student delegates and Philip Barker, assistant professor of political science, left Austin College on November 18 to travel to Prague, Czech Republic, where they spent a few days before traveling on to the conference site on November 22. Students visited nearby Auschwitz and Plaszow (Krakow) concentration camps in Poland as part of the conference emphasis on experiencing the culture and history of the Czech Republic. The Austin College students spent one day in Vienna, Austria, after the conference, returning to campus on November 28 with outstanding awards for both delegations as well as committee honors for individual students.

For more than 25 years, Austin College delegations consistently have earned top honors for their conference representation. Students participate each spring in the National Model United Nations conference in New York City. For many years, they participated in fall conferences in Chicago, but the past two years have traveled a bit farther afield—traveling to Xi’An, China, in 2009 for the first National Collegiate Conference Association international event and to the second international session, at Palačky University in Olomouc, Czech Republic, in late November this year.

Senior Willoughby Smith and junior Sai Balasubramanian served as head delegates for Austin College, not assigned to committee, but assisting all delegates in preparation of materials and rules of order for the conference.

Austin College participants are listed below by hometown, along with the delegation represented, as well as their parents’ names and the local high school from which they graduated.

The National Model United Nations conference is a simulation of the actual working of the UN. Delegates must learn all positions of the country they represent, and then represent those positions during caucus and committee sessions, examining real issues of the UN.

Austin College participants prepared for months, researching assigned countries of France and Canada to understand the positions of those nations in preparation for caucus and committee sessions dealing with real issues of the United Nations. Students served on the General Assembly and the Security Council for each country. Conferences address important issues including regional conflicts, peacekeeping, human rights, women and children, economic and social development, and the environment. The Austin College delegations were among 300 participants from 11 countries, with students attending from 37 colleges on three continents.

Event coordinators this year sought a European or African venue to involve students from all parts of the world. Though the New York event includes 5,000 participants from five continents, the international venues allow more involvement from nearby nations and also allow participants to explore the culture of the conference sites.