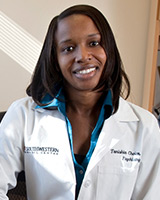 Tanishia Choice, a 2004 Psychology major, attended the University of Texas Southwestern Medical School, completing her degree in 2008 as a co-recipient of the North Texas Society of Psychiatric Physicians Award for the outstanding student in psychiatry. She continued fellowship work at UT Southwestern and was one of only 10 psychiatric residents nationwide to receive the 2010-2012 American Psychiatric Association Public Psychiatry Fellowship.