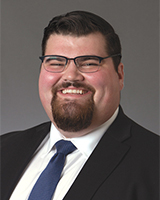 Tim Smith is a Denton native at heart but grew up in a military family as his father served 24 years in the Air Force. His family finally settled in Denton in 2003 where he graduated high school and then attended Austin College, graduating in 2013. Tim immediately joined Modern Woodmen Fraternal Financial as an advisor and then moved into management in 2015 as a partner. In 2018, Tim became the Regional Director for the North Texas office and now leads a team of twenty advisors and partners from Denton to Plano, Dallas, Sherman, Royce City, and Sulphur Springs. Tim and his wife, Lauren (also an Austin College graduate), live in Denton with their pitbull-dachsund mix (Lucy). Tim serves in the community as the president of the Denton Parks Foundation and as a commissioner on the City of Denton Planning and Zoning commission.