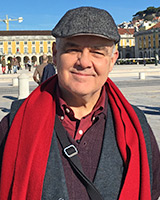 During a January European trip with students

Dr. Hunt Tooley, Austin College’s A.M. Pate Jr. Chair of History, will present “Doughboys into GIs: From the Great War to D-Day” on Thursday, June 9, at 6 p.m. as the guest speaker at the Eisenhower Birthplace State Historic Site. The historic site is located at 720 S. Lamar in Denison, Texas. Admission is free, and the public is welcome.

As a historian, Tooley studies war, revolutions, and peace in the modern world. He is the author of three books, including The Great War: Western Front and Home Front. His talk will explore how the legacies of the “War to End All Wars” molded the next battle for Europe. Tooley teaches courses in Modern European history, the 20th-century world, and Middle Eastern history. He is a specialist in Central European history since 1800.

Tooley joined the Austin College faculty in 1991. He earned his bachelor’s and master’s degrees from Texas A&M University and his Ph.D. in history at the University of Virginia.