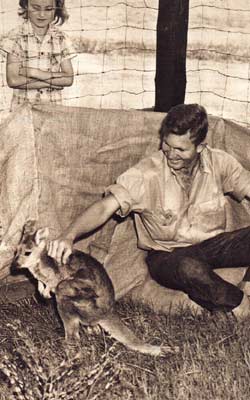 Although the courts were abolished in 1915, our students’ love of kangaroos persisted. So it was that the Class of 1923 bought a live kangaroo from a zoo in California. Named after Trustee Pat E. Hooks, “Pat” the kangaroo came to campus in 1922 to live under the steps of Luckett Hall. The three-year-old kangaroo stood five feet tall.

This was a huge boost to student morale. The kangaroo and their 12-piece band gave Austin College students “the conviction that the Kangaroos could compete athletically with any school in the Southwest.” Pat was taken on a leash to home football games, pre-game bonfires, biennial games with archrival Trinity, and games with SMU in Dallas.

All went well until Pat accompanied the team to training camp at Woodlake, where he died. Pat was buried just north of the present location of Baker Hall at a funeral service held by students one morning after chapel. 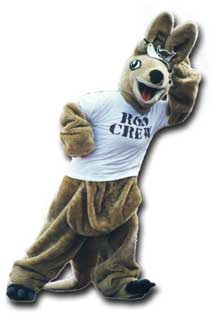 A second mascot was purchased from a circus in 1924. After “Pat II” met a similar fate, the student body decided a kangaroo was too delicate a creature to survive in Texas. Pat II was not replaced until the fall of 1950 when Austin College students bought a six-month-old female Australian wallaby named Katy.

Katy was small—about three feet high and seventy-five pounds at maturity—and lived in a pen built especially for her next to the gymnasium. Fitted with a harness, Katy and her handlers dashed up and down the football field during halftime. She even appeared at the Cotton Bowl in Dallas during the Austin College-Mexico City University game. Katy died in the summer of 1960.

The Austin College mascot has been played by a human ever since.