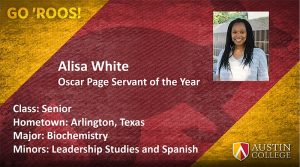 This award is presented annually to a student who has demonstrated a heart for community service, individually or as part of an organization. It is named in honor of Austin College President Emeritus Oscar C. Page, who inspired students to give back to the community and participated in many service events alongside students. The application will close on Monday, April 12 by 11:59 p.m.