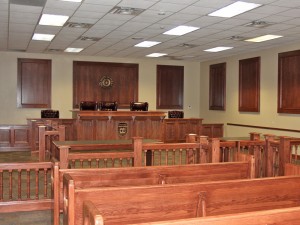 The Kenneth W. Street Advocacy Courtroom was dedicated during Homecoming 2015, honoring the longtime faculty member whose name has long been synonymous with law and public service preparation at Austin College. Gifts from alumni and friends created the named facility to support the Advocacy Teams.

The Mock Trial program helps law students succeed in law school and in their careers by teaching the fundamentals of the rules of evidence, civil and criminal procedure, and litigation strategy and techniques. It helps all students involved, no matter what their career aspirations may be, by teaching rigorous analysis and public speaking.

The Mock Trial program will participate in invitational tournaments:

Invitational Season is in high gear for the Austin College Mock Trial Team, which competes in events all over the country sponsored by the American Mock Trial Association (AMTA).  The Roo Mockers have just begun their 5th Season, coming off of a successful 4th season that saw the team qualify for the Opening Round Championship Series wherein the top programs in the country compete to earn a bid to the National Finals.

The Demon Deacon Invitational
October 19-20, 2019 | Winston-Salem, NC
Following a challenging and highly competitive pre-season, two squads of Roo Mockers traveled to Winston-Salem, North Carolina to compete in The Demon Deacon Invitational Tournament held at Wake Forest School of Law. Three Roo Mockers earned recognition for top performances.  Senior Bre Smith and Freshman Thomas Strutton, both playing witnesses for the first time, were recognized as TOP Witnesses for the tournament.   Meanwhile, Junior Nate Krasovitsky was recognized as a TOP Attorney. To obtain recognition as a top witness or attorney, a competitor must typically be ranked as the best competitor in either the witness or attorney category in multiple rounds of competition.

Big Easy Mock Trial Invitational
November 1-3, 2019 | New Orleans, LA
Most recently, the Roo Mockers traveled to New Orleans, Louisiana over Halloweekend to compete in The Big Easy Tournament hosted by Dillard University and sponsored by the Tulane and Loyola Schools of Law.  Teams competed in the Civil District Courthouse in New Orleans before sitting judges and local attorneys.  Team 1350, behind Captains Elizabeth Parker and Nate Krasovitsky, placed third with a record of 5-2-1, narrowly missing second place by a single point in the last round.  Team 1349, behind Senior Captains Bre Smith and Cailey Callahan, finished the tournament 4-4 with some big wins and narrow losses.  For the first time in program history, a Roo Mocker was recognized as both a Top Attorney and a Top Witness in the same tournament.  Senior Bre Smith was once again recognized as a Top Witness for her portrayal of Cajun Chef Remy Mouchard and, on the power of some vicious cross examinations and fiery closing arguments, as a Top Attorney.  Junior Elizabeth Parker was recognized as both a Top Prosecutor and a Top Defense Attorney, the only competitor in the tournament to earn recognition on both sides of the case. 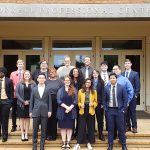 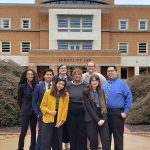 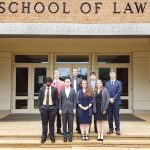 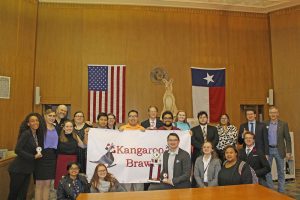 The Austin College Advocacy Program is excited to announce the 3rd Annual Kangaroo Brawl, it will be held on January 25-26, 2020. The tournament will take place in actual courtrooms located in Sherman, Texas. Team Awards will be given for the top five finishers, plus Individual Awards for the top advocates and witnesses. The tournament will follow AMTA rules and will include two rounds on Saturday and two rounds on Sunday followed by a short awards ceremony. Registration will be $250.00 for one team or $400.00 for two teams. The field is limited to 18 teams. There is no requirement to bring a judge, but any judge you bring we will gladly put to work. To register or ask questions, please contact Ed Richardson. 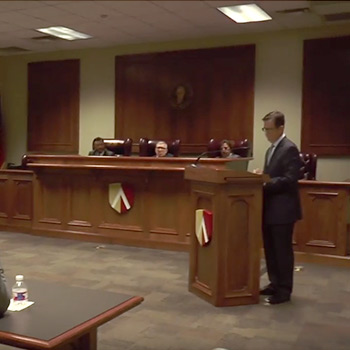 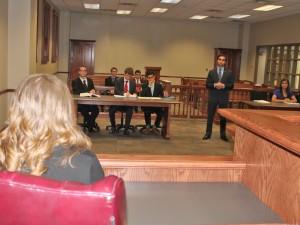 Austin College dedicated the courtroom built in the library to Dr. Kenneth Street, a beloved government professor. Students who are in the advocacy program benefit from the courtroom, as it provides a stimulating and realistic environment to challenge their peers and practice their skills.