A virtual 5K is basically a “regular” 5K—except you get to set your route and your starting time! Do your run any time October 2-9 and post your time. T-shirts will be mailed to all finishers. Sign up online now! Registration $25; details on the registration site.

Join with #RooNation starting October 3 and make a class gift in support of Austin College.  Every gift matters to Austin College, no matter the size. Join your fellow 'Roos in the All-Class Challenge with a gift today!

Video message available starting at Noon on Austin College’s Facebook account. Hear a message from President Steven O’Day as he provides perspective on where we’ve been, where we are, where we’re going.

Rules for Being Dead Book Club with Kim Powers ’79 Expand

Join best-selling author Kim Powers ’79 for discussion of his latest novel, Rules for Being Dead, in our virtual book club! Register for this event to receive the Zoom link.

Kim Powers is the Senior Writer for ABC's 20/20, part of the team that has received three consecutive Edward R. Murrow Awards. He also won Emmy and Peabody Awards for his 9/11 reporting for Good Morning America. After graduating from Austin College, Kim earned a Master in Fine Arts from the Yale School of Drama. The author of novels Capote in Kansas and Dig Two Graves and the award-winning memoir The History of Swimming, he also wrote the screenplay for the festival-favorite indie film Finding North and the new play Sidekicked, a "one broad comedy" about Vivian Vance. In 2014, he was recognized as a Distinguished Alumnus of Austin College. He lives in Manhattan and Asbury Park, NJ.

Facebook regulars know Marc Parrish ’92 can find a connection between Austin College and almost anything—and rarely requires six degrees of separation! Join in a fun and interactive time of trivia. Think Marc can stump you? Register for the event to receive the Zoom link and play along with your fellow ’Roos!

Marc lives in Austin, Texas, where he serves as Manager of Information Technology for The University of Texas System. Following graduation as a ’Roo, Marc earned a Master’s in International Relations and National Security Studies from Tufts University – The Fletcher School of Law and Diplomacy. He also is the prolific author of ’Roo stories on his personal Facebook account – and author of the book ’Roo Tales: The Story of Austin College Athletics, available on Amazon. Marc serves on the Austin College Alumni “A” Athletics Board.

President Steven P. O’Day, J.D., will host a “fireside chat” with 2020 Williams Executive-in-Residence Melissa Thompson ’84, Senior Vice President for Talent Acquisition at the Nielsen Company, Dallas. Melissa will share insight from her 25-year career in global human resources and talent acquisition including leadership positions at McGraw-Hill Education, Citrix, Dell, and as CEO of Thompson Talent Innovations. After graduating as business major in 1984, she earned a Master’s in Human Resources from The University of Texas – Red McCombs School of Business. Melissa currently serves on the board of Association of Talent Acquisition Professionals.

The traditional Homecoming Worship moves from morning to evening. Included is a reading of names in recognition of those alumni who have died since October 1, 2019. Specially recorded music from the A Capella Choir will be featured. Register to receive the Zoom link to this special service.

See photos from past Homecoming events! 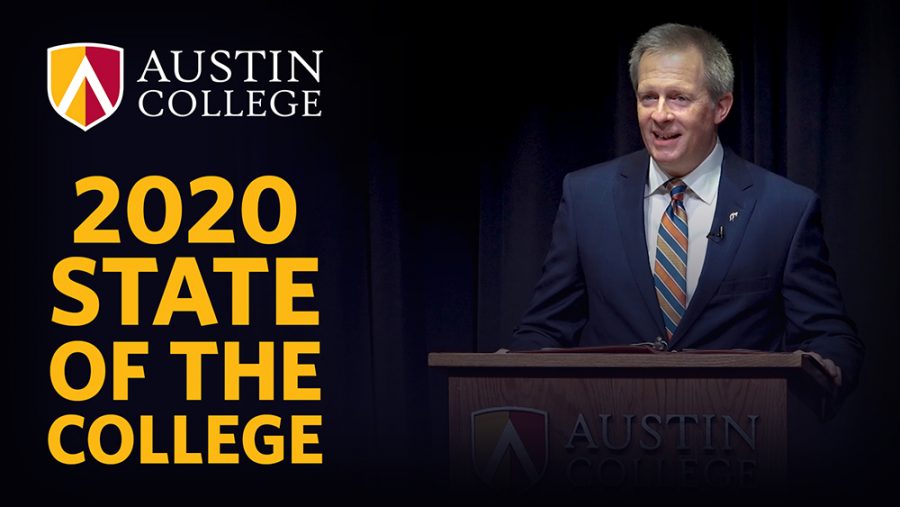 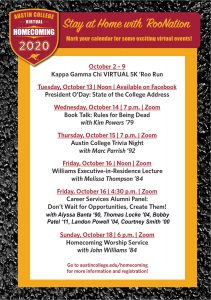 Staying close to home is more
fun when you stay connected!

ZOOM links will be sent to
registrants prior to each event.

Don’t miss your chance to win TOP CLASS in the 2020 Virtual Homecoming All-Class Alumni Giving Challenge! Make a gift of any size between October 3-17 and you will be automatically qualified as a part of your graduating class participation. Watch our official social media to see updates to the leaderboard, and share the news with your fellow ‘Roos!