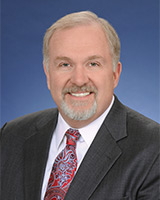 Austin College’s 2017 Todd A. Williams Executive-In-Residence Lecture will feature John Mendel, a 1976 graduate of Austin College and retired executive vice president of American Honda Motor Company. The luncheon and lecture “Leading by Heart Count, Not Head Count” will be presented at 11 a.m. on November 16 in Wright Campus Center’s Mabee Hall. The event is open to all faculty, staff, and students, and attendees should make a reservation through Wanda Hardy or the Hopkins Center main office at 903.813.2271.

After earning his bachelor’s degree from Austin College, Mendel earned his MBA and Global Executive MBA from Duke University’s Fuqua School of Business. He worked for Ford Motor Company in several capacities, including two years as director of marketing for Ford Britain, and three years as chief operating officer of Mazda North America. He then moved to American Honda Motor Company, where he served as executive vice president for 13 years before recently retiring.

During his lecture, Mendel intends to discuss his hypothesis of leadership. “In my experience with new hires in the last few years, I have noticed that they are focusing more on the management side of running things rather than true leadership,” he said. “Some would argue that entry positions don’t lend themselves to leadership but I would disagree. I’d really like to challenge the traditionally held learnings around entry level leadership—not challenging academia but providing a different view.”

Since retiring, John and his wife, Luan Beaty Mendel, also an Austin College graduate, and their sons and daughters-in-law have co-founded Devil’s Creek Distillery and joined the small batch craft spirits distilling movement in Mammoth Lakes, California. They are producing whiskey, bourbon, vodka, and an agave spirit.