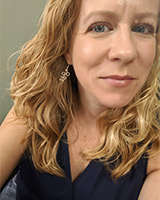 Co-Pastor of First Presbyterian Church in San Marcos, Texas;
B.A. in English from AC in 2000;
M.A. in Teaching from AC in 2001;
M.Div. in 2005 from Princeton Theological Seminary;
Honorary Doctor of Human Letters from AC in 2020

After graduating from AC, I married a fellow ACtivator, taught elementary school in inner-city Dallas, and worked in churches in Texas, Oklahoma, and New Jersey.  After seminary in New Jersey, I was ordained as a Minister of Word and Sacrament in the PC(USA) and have pastored the First Presbyterian Church Huntington, West Virginia, and the First Presbyterian Church in San Marcos. I’ve also done a lot of writing, including a published Bible study, and enjoy retreat speaking and travel.  However, a large portion of my time is spent on the sidelines of my 4 kids’ soccer games, and laundering their dirty socks.

I have countless memories from my days as an ACtivator, including the semester I had no Friday classes and so traveled to an ACtivator event nearly every weekend.  Highlights include sleeping and songwriting in a 15-passenger van all the way across Texas, JW’s mixed tapes, late-night Marfa light-marveling, a snow-surrounded hot spring near Durango, Colorado,  endless energizers at Youthquakes, and serving as one of the original Sallie Majors’ Interns.