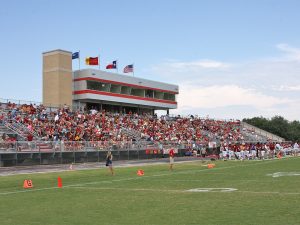 When the Austin College ‘Roo football program is in action in Apple Stadium, memorable tailgating moments are happening in Larry Kramer Outback, located just beyond the south end of the field. At Homecoming 2014, the area was named in memory of Larry Kramer, legendary head football coach at Austin College from 1973 to 1982 who guided the ‘Roos to the 1981 NAIA National Championship.

Dedicated during Homecoming at the Fifth Annual President’s Luncheon, on Saturday, October 21, 2000, the stadium seats 2,500 and architecturally enhances the west side of the campus.  The brick and wrought iron motif extends from the stadium to encompass all the outdoor athletic facilities.  Jerry and Joy Apple contributed $860,000, more than half the estimated cost of the completed project.  The Apple Stadium gift continues an aggressive building program at Austin College.