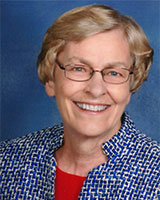 Calling her career a “life-long personification of the Austin College mission,” Austin College President Steven O’Day has announced Dr. Ruth Whiteside as the 2019 Commencement speaker for the College. Dr. Whiteside retired from the Department of State in 2013, following a 35-year career and serving under 12 Secretaries of State. She graduated from Austin College in 1964 and is currently a member of the Board of Trustees.

Commencement exercises for some 280 Bachelor of Arts degree candidates in the Class of 2019 will be held May 19 at 8:30 a.m. on the Clyde L. Hall Graduation Court on the college campus. Additionally, Master of Arts in Teaching degrees are expected to be awarded to 11 candidates who have successfully completed the Austin Teacher Program.

“It is with great pleasure I announce Ruth as this year’s Commencement speaker,” President O’Day said to the campus community in an announcement. “I have no doubt her message to the class will be a meaningful one.” O’Day will present the speaker with an honorary Doctor of Humane Letters degree during the Commencement exercises.

Shortly after her graduation from Austin College, she returned to the campus to fill a temporary vacancy in the History Department and to support student government activities. Before joining the State Department, Whiteside served as the assistant director of the Southwest Center for Urban Research and the Institute for Urban Studies at the University of Houston

Her Department assignments, first in the Foreign Service and then in the Senior Executive Service, include service in Spain, the Policy Planning Staff, the Bureau of European Affairs, the Bureau of Diplomatic Security, and Executive Assistant to the Department’s Under Secretary of State for Management.

From 2001 to 2006, she served as the Principal Deputy Assistant Secretary in the Office of the Director General, Bureau of Human Resources. Whiteside assumed duties as Director of the Foreign Service Institute in February 2006 and continued that work until her retirement in February 2013. Directors of the Foreign Service Institute are designated by the Secretary of State and hold rank equivalent to an Assistant Secretary of State.

Her husband, James Shelhamer, is a physician, now retired from the National Institutes of Health. The couple live in the Washington, D.C.,-area and are active members of Chevy Chase Presbyterian Church. She also enjoys travel and is a community volunteer.

Austin College, a private national liberal arts college located north of Dallas in Sherman, Texas, has earned a reputation for excellence in academic preparation, international study, pre-professional foundations, leadership development, committed faculty, and hands-on, adventurous learning opportunities.One of 40 schools profiled in Loren Pope’s influential book Colleges That Change Lives, Austin College boasts a welcoming community that embraces diversity and individuality, with 46 percent of students identifying as persons of color. The residential student body of approximately 1,300 students and more than 100 expert faculty members allow a 13:1 student-faculty ratio and personalized attention. This year, the campus recognizes 100 years of co-education and has had several opportunities to recognize the history of women and accomplishments of current alumnae. Austin College is related by covenant to the Presbyterian Church (USA) and cultivates an inclusive atmosphere that supports students’ faith journeys regardless of religious tradition. Founded in 1849, the College is the oldest institution of higher education in Texas operating under original name and charter.