Home » News » Austin College Class of 2019 Steps into the Future 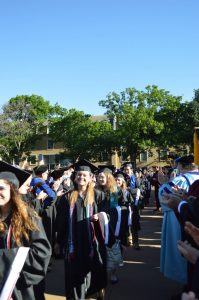 Saturday’s storms were all but forgotten Sunday morning as Austin College’s Clyde Hall Graduation Court filled with parents, grandparents, friends, and other family members in anticipation of the procession of the Class of 2019 and the start of Commencement exercises.

The booming thunder of Saturday gave way to the call of the bagpipes that traditionally lead the College’s procession. And in answer, followed the graduates-to-be, the faculty of the College, members of the Board of Trustees, special guests in the platform party, and finally, Austin College President Steven P. O’Day.

President O’Day was the first to offer  words to the graduates, reminding them that the day marks a milestone, not only for them, but for the greater Austin College community. “We know all of the things we’ve tried to give you, the opportunities we’ve tried to provide, but now, it’s time for you to reflect,” O’Day said. “What will you take with you? What were your discoveries?”

To share his pride in the moment, President O’Day chose to quote a well-known Presbyt 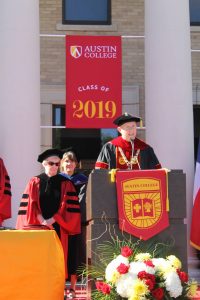 erian, Fred Rogers, better known as Mister Rogers, who wrote, “To me, what makes someone successful is managing a healthy combination of wishing and doing. Wishing doesn’t make anything happen, but it certainly can be the start of some important happenings. I hope that you’ll continue to wish and dream all you can. And that you’ll do all you can to help the best of your wishes come true. I’m proud of you for all of the dreaming and the doing that has helped you get to this point in your lives and I hope you are, too.”

Each year, the faculty selects two outstanding scholars in the graduating class for special recognition by the Board of Trustees. The awards are made, with no distinction between them, on the basis of the student’s entire academic record as reflected on the transcript, the balance in course distribution, cumulative grade point average, and credits earned. The students selected become the recipients of the J.C. Kidd and J.M. Robinson Memorial Scholarship Medals. The Kidd medal is made possible through the generous gift of a Houston resident in memory of his friend J.C. Kidd and was first presented in 1940.  The Robinson medal is given in memory of Mr. and Mrs. J. M. Robinson of McKinney and was first presented in 1935.

Elected by her classmates, senior speaker Clarissa Caballero Pinedo spoke to the assembled crowd first of 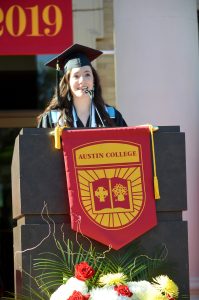 gratitude on behalf of all graduates. She then turned her attention to her classmates to talk of shared experiences and memories, accomplishments and hopes for the future, life lessons learned and obstacles overcome. “I want us to remember,” she said, “that only 6.7% of the global population has earned a college degree. We have a responsibility toward our communities, so do not let this invaluable education go to waste. I ask that each of you go out to the real world, help others as much as you can, laugh with others as much as you can, and love others as much as you can—even when it seems impossible. In doing so, I promise you will leave this world in a lot better shape. Be the best educators, environmentalists, lawyers, businessmen and women, researchers, moms and dads, doctors, scientists, economists, actors, but above all, be the best YOU.”

Finally, she asked that the graudates look around at their classmates. “This is diversity,” she said. “This is multiculturalism. This is America’s move toward equality. This is Austin College.”

The Commencement Address came from Dr. Ruth Whiteside, a 1964 graduate of the College who indeed used her degree to better her world. She served 35 years in the U.S. State Department before her 2013 retirement.

As an alumna, Whiteside compared her college years with those of the day’s graduates, smiling as she compared technology then and now, sober as she referred to the one person of color in her graduating class: a young man named Pierre Shamba, from the Congo. “Pierre had been educated by Presbyterian missionaries and enrolled at a college in Alabama,” she said. “When the KKK threatened his safety, he transferred to Austin College. Pierre flourished in the Austin College family, both academically and socially, but in the days before landmark changes in our nation’s civil rights laws, Pierre was not welcome in most public places off campus.”

But, Whiteside proudly stated that the fundamental dedication of the College’s leadership, faculty, and staff to “the transformative power of a liberal arts education” remains just the same. Like Caballero, Whiteside served as Austin College student body president. She, however, was the first woman to hold the title.

Focusing on the present day, Whiteside said things are a bit of a mess in Washington. “Sadly as a nation, we are more diverse, but less inclusive,” she said. “I see ugly partisanship, a frequent lack of civility on all sides, failure to grapple with real solutions to the fate of our planet, growing economic inequality, a broken and inhumane immigration system, and most important, genuine challenges, domestically and internationally, to our constitutional democracy.”

Her words were not without hope. “The upside of all this messiness,” she said, “is that, Class of 2019, there are so many ways in which you will be heroes! You are just the folks to take on that good work. At some point in 2019, Millennials will overtake Baby Boomers as the largest group in our nation’s population. Your generation will have extraordinary opportunities to shape the future. Just as decisions in your personal and professional lives will shape your own destiny, the collective decisions your generation makes will shape the future of our nation, our role in the world, and above all, the fate of our planet. It is an awesome challenge, but one I know you will embrace.”

The distinguished speaker, also a member of the Austin College Board of Trustees, closed with advice based on her own wisdom. “As best you can, let a spirit of gratitude be your pole star—and don’t let the sun go down today without thanking those most responsible for your Austin College education,” she said. “Hold fast to the friends and the relationships you have built here, and build strong communities wherever you are; take a weekly sabbatical from all your digital devices to help tune out the noise and keep yourself centered. Find a way to serve wherever you are and live with generosity of spirit and resources. Class of 2019, go forward now with boldness and courage, thankful for the road you have traveled; always hopeful for the road ahead—and God bless you on your way.” 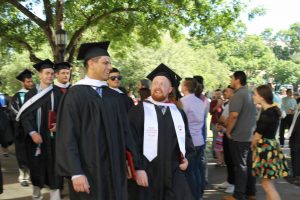 Also among the honorees were several members of the Class of 1969 on campus to celebrate the 50th anniversary of their own graduation.

Finally, some 270 Bachelor of Arts degrees were granted to the Class of 2019, as were 19 Master of Arts in Teaching degrees, closing the 170th year of the college.

And again, the bagpipes called and the new alumni stepped forward to their futures.