Home » News » Austin College Esports Team Is on the Road 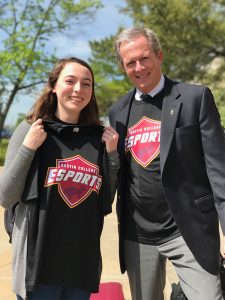 President O’Day sends the team off in style as Maggie Zumwalt tries out her new team “jersey.”

The Austin College esports team is on the road this weekend—traveling to Kerrville, Texas, where teams from six member schools will meet for the inaugural Southern Collegiate Athletic Conference esports Showdown, hosted on the Schreiner University campus.

The 2019 SCAC esports Showdown will include teams from Austin College, Colorado College, Johnson & Wales University, Schreiner University, Southwestern University, and Trinity University. The competition is only the second NCAA Division III-level esports conference championship event, according to SCAC officials. “Although esports is not yet considered a varsity sport, we are excited to utilize the conference umbrella to provide another extracurricular opportunity for SCAC students to compete,” said SCAC Commissioner Dwayne Hanberry. “Our goal at the conference office is to assist our membership in creating memorable experiences for students. We believe this event is another avenue to do that and with a segment of students who perhaps don’t get that opportunity in what would be considered the traditional athletic arena.”

Many collegiate esports competitions focus entirely on League of Legends, but the SCAC Showdown teams will also compete in Overwatch, Fortnite, and Super Smash Bros Ultimate. The school that accumulates the most points (based on team finish) in the four different gaming competitions will be declared the league’s 2019 esports champion. Over 100 students and coaches are expected to participate in this event.

The Austin College team members that traveled for the competition, by game, are listed below. 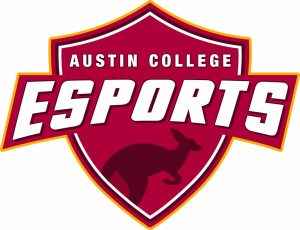 While the team revolves around gaming, it isn’t just for gamers. The Austin College program is designed to provide experiential learning through program leadership roles and the creation and production of videos, all of which are preparation for careers as writers, video editors, analysts, coaches, broadcasters, and more. Brett Boessen, associate professor of media studies, is faculty sponsor for the group.

Austin College, a private national liberal arts college located north of Dallas in Sherman, Texas, has earned a reputation for excellence in academic preparation, international study, pre-professional foundations, leadership development, committed faculty, and hands-on, adventurous learning opportunities. One of 40 schools profiled in Loren Pope’s influential book Colleges That Change Lives, Austin College boasts a welcoming community that embraces diversity and individuality, with 46 percent of students identifying as persons of color. The residential student body of approximately 1,300 students and more than 100 expert faculty members allow a 13:1 student-faculty ratio and personalized attention. This year, the campus recognizes 100 years of co-education and has had several opportunities to recognize the history of women and accomplishments of current alumnae. Austin College is related by covenant to the Presbyterian Church (USA) and cultivates an inclusive atmosphere that supports students’ faith journeys regardless of religious tradition. Founded in 1849, the College is the oldest institution of higher education in Texas operating under original name and charter.