Austin College will hold its Baccalaureate Service for the Class of 2022 on Friday, May 20, at 7 p.m. in Clifford J. Grum Sanctuary of Wynne Chapel. Baccalaureate is a worship service for graduates and their families that expresses gratitude for students’ accomplishments in arriving at this point in their journeys and a time of blessing as they go out into the world. Commencement Exercises will be held the next morning, Saturday, May 21, at 8:30 a.m.

Following a welcome from Austin College President Steven P. O’Day and music from members of the College’s A Cappella Choir, Dr. Theodore “Ted” Wardlaw, president of Austin Presbyterian Theological Seminary, will present the sermon “You Are What You Own?” the Cappella Choir will be conducted by graduating senior Logan Shevalier.

Theodore J. Wardlaw became the ninth president of Austin Presbyterian Theological Seminary in 2002. He has since led the seminary in capital campaigns raising more than $100 million, 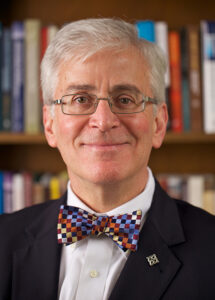 funding the construction of two four-story apartment buildings for students, endowments for faculty chairs, and the renovation of Wright Learning Information Center, among other advancements. He preaches and teaches widely across the country, has contributed to several edited books, and has written multiple articles for periodicals, including The Christian Century, Journal for Preachers, Call to Worship, and The Presbyterian Outlook.

A native of South Carolina, Wardlaw received his bachelor’s degree at Presbyterian College in Clinton, South Carolina; his Doctor of Ministry degree at Union Theological Seminary in Virginia, and a Master of Sacred Theology degree at Yale University Divinity School. In 2007, he was awarded an honorary Doctor of Humane Letters degree from Presbyterian College. He will receive an honorary Doctor of Divinity from Austin College during Commencement ceremonies Saturday morning.

Wardlaw announced earlier this year that he would retire from the seminary by year’s end.

His tenure has seen the addition of new degree programs, fellowships to provide grants to students of color, and the Post-Graduate Residency Program. Through these additions and more, Wardlaw has worked to prepare the seminary to take on the challenges facing theological higher education in the 21st century.

Several 50-year graduates of the College, gathered for reunions and induction into the Golden ’Roo Society, will lead the procession into  Baccalaureate. Due to COVID restrictions, the reunion has not been held for two years, so the group will include alumni from the classes of 1970, 1971, and 1972.

The Prelude and Postlude will be performed by Dr. Lisa Thomas, College Organist. Dr. Wayne Crannell is the director of choral music at the College. Dr. Nate Bigelow of the Political Science faculty is the College Marshal.