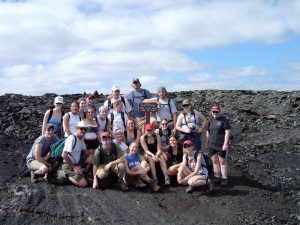 Steve Goldsmith, Austin College professor of biology and dean of Sciences, has taken student groups to Hawaii several times during January Terms in the past 20 years. Since he explains that the whole island is a volcano (five separate ones actually) he knows a bit about volcanic activity, though he and students explore the full range of habitats on the islands– from coral reef to tropical forest to desert in their quest to observe the biological diversity and ecology of the island.

In light of the recent devastating eruptions in Hawaii, Goldsmith offered some basic educational information about the volcanoes and the area: 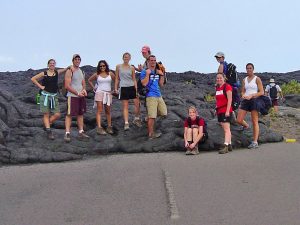 Kilauea, one of the five volcanoes that comprise the Big Island of Hawaii, has been erupting continuously since 1983. Most of the eruption has come from a vent in Kilauea’s east rift zone called Pu’u O’o, which is located approximately 11.5 miles from the summit vent. The summit vent, known as Halema’uma’u (the fire pit, which in Hawaiian tradition is the home of Pele, the goddess of the volcanoes), began a steam eruption five years ago, and has recently been erupting with ash and some molten lava. The current dramatic eruption, which is destroying homes and covering the land with lava flows, is within Kilauea’s east rift zone, about 15 miles from Pu’u O’o. There is an undersea volcano, the seamount Loihi, about 20 miles southeast of the southeast coast of the Big Island. The summit of Loihi is about 3,000 feet below the ocean’s surface. Samples of material from its summit and earthquakes in its area indicate that Loihi is actively erupting. The current eruption is located about halfway between the Kilauea summit and the Loihi summit, so it is no surprise that the volcano is erupting where it is.

The lava that is erupting from Kilauea, which is a relatively young shield volcano, is iron-rich and solidifies at low temperatures, so it flows long distances from the eruption site, and often flows into the sea before it solidifies. In some instances, the lava flows through “lava tubes” which are tunnels through which lava flows downhill, before “breaking out” in overland flows, or entering the ocean directly from the tube. Overland flows like the ones in the Pahoa area are particularly devastating, destroying everything in their path. The community of Kalapana, which was downhill from the Pu’u O’o vent, was almost completely obliterated in the late 1980s and early 1990s by lava flows. 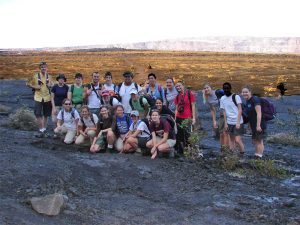 In 1999, 2002, 2004, 2006, and 2016, Austin College offered a January Term course called Natural History of the Hawaiian Islands. Approximately 100 ‘Roos visited the Kilauea volcano in those courses. All of them walked on some of the newest land on the planet, and some of them were able to see active lava flows (from a safe distance!). All of them learned about the nature of shield volcano eruptions, the formation of lava tubes, how volcanic islands are formed and degraded, and about the cultural significance of the volcanoes and their products. All of them hiked through the rainforests and deserts of the Kilauea summit area, where they learned about the endemic plants and animals of the Hawaiian Islands, most of which are found nowhere else on the planet.