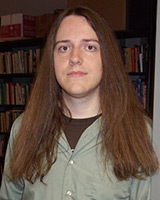 I teach at Austin College with vivid memory of a place that changed everything for me. I graduated (’04) having expanded my career goals in step with my exploding vision of the world: I wanted to be an anthropologist, a way of thinking and doing which I had never really encountered before college. In 2011, I leapt at the chance to return, and I find it extraordinarily gratifying to introduce students to the field that helped me see the world not from a single new perspective, but hundreds. I know what you’re capable of becoming, and I’ll do my best to help you get there

Though most anthropologists go far afield for their research, I try to unearth the complexity of social interaction in our own backyard. My most prolonged research has been among people who are seeking political asylum on the grounds of having been tortured. My research sites have been in and between non-profit centers, courts of law, immigration offices, and on the many highways of Texas, interacting with people from around the world. The questions I marshal through this research have involved areas of human rights, language, transnationality, violence, and the law.

2011 The Objective and the Ad Hoc: Trying Political Asylum in the United States. Paper presented to the 110th Annual Meeting of the American Anthropological Association. Montreal, Quebec. November 15-20.

2013 “I Was Never Able to Tell My Story”: Making Torture Narratives Palatable in U.S. Immigration Courts. Paper presented to the 112th Annual Meeting of the American Anthropological Association. Chicago. November 20-24.

2014 We Don’t Usually Do This: Everyday Exceptionalism and US Refugee Service NGOs. Accepted paper for the 113th Annual Meeting of the American Anthropological Association. Washington DC. December 2-7.

2015 Asylum-Seekers, Spare Couches, and the Politics of Hospitality. Paper presented to the 115th Annual Meeting of the American Anthropological Association. Denver, CO. November 17-21.

I serve on the Writing Committee, the Diversity and Inclusion Task Force, and the Phi Beta Kappa committee, among others.