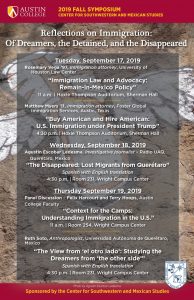 “Reflections on Immigration: Of Dreamers, the Detained, and the Disappeared” will be the theme of an upcoming symposium of Austin College’s Center for Southwestern and Mexican Studies. Dr. Julie Hempel, Austin College associate professor of Spanish and director of the center, organized the symposium. The lectures, held September 17 through 19, are free and open to the public.

Immigration attorney Rosemary Vega will present the first session, “Immigration Law and Advocacy: Remain-in-Mexico Policy,” at 11 a.m. in Sherman Hall’s Hoxie Thompson Auditorium. A clinical lecturer with the University of Houston Law Center’s Immigration Clinic, Vega is a 1997 graduate of Austin College, who enrolled at St. Mary’s University Law School and completed her degree in 2000. She began her interest in immigration law through the International Human Rights Clinic at St. Mary’s Law School and has advocated for immigrants since that time. Upon earning her law degree, she was the judicial law clerk for seven immigration judges at the Houston Immigration Court through the Department of Justice Honors Program from 2000-2001. Before taking on her current work, she served as the staff attorney at YMCA International Services, was a partner with Tausk & Vega, and was in private practice in her own firm. Vega is the current American Immigration Lawyers Association/ Executive Office for Immigration Review liaison for Houston.

At 4:30 p.m., immigration attorney Matthew Myers will present “Buy American and Hire American: U.S. Immigration Under President Trump.” The lecture also takes place in Sherman Hall’s Hoxie Thompson Auditorium. Myers is an attorney with the immigration law firm of Foster LLP, focusing on employment and investor immigration. He also serves as Chair Elect of the Immigration & Nationality Section of the State Bar of Texas. Prior to joining Foster, Myers clerked for U.S. Chief Judge Orlando Garcia for the Western District of Texas as well as for U.S. Citizenship and Immigration Services, Office of Chief Counsel. He graduated from Austin College in 2011 with a bachelor’s degree in economics and Spanish and received his law degree from Baylor Law School.

Mexican journalist Agustín Escobar Ledesma will present “The Disappeared: Lost Migrants from Queretaro” on Wednesday, September 18, at 4:30 p.m. in Wright Campus Center, Room 231. He will present in Spanish with English translation. Currently affiliated with Radio UAQ at the Autonomous University of Querétaro in central Mexico, Ledesma also has worked for various local and national media outlets in Mexico. He has received numerous awards for his work, including the Queretaro State Journalism Prize for 2000 and 2001 and the 2016 “Ezequiel Martínez Ángeles” Medal of Honor awarded by the state legislature. He has published 15 books, primarily on the topics of indigenous and rural protest actions, as well as three books on migration and a 2019 book of the lost migrants of Queretaro.

Austin College faculty Terry Hoops, anthropology, and Felix Harcourt, history, will hold a panel discussion Thursday, September 19, at 11 a.m., in Wright Campus Center, Room 254 to explore “Context for the Camps: Understanding Immigration in the U.S.” Raised in Argentina, anthropologist Terry Hoops leads courses that teach students to ask questions and unpack tangles of cultural, historical, and material complexity, with a focus on Latin America, urban centers, food, and the politics of water. During the past eight years, he has developed and taught an anthropology course titled “Immigration Policy and the Immigration Experience.”  Harcourt’s work focuses on the intersection of prejudice, politics, and popular culture. He is the assistant editor of two volumes of the collected papers of Eleanor Roosevelt and is the author of Ku Klux Kulture: America and the Klan in the 1920s. He will next offer his “Immigration History” course in fall 2020.

Anthropologist Ruth Soto will present “The View from ‘el otro lado’: Dreamers from ‘the other side’” as the final session of the symposium at 4:30 p.m. Thursday, September 19, in Wright Campus Center, Room 231. Her lecture will be presented in Spanish with English translation.  Soto is an instructor of language, literature, and culture at the Autonomous University in Querétaro and a cultural affairs representative at the Regional Office of Popular, Indigenous, and Urban Cultures. Through contact with various Mexican American students, Ruth became interested in their hybrid culture. She later focused her anthropology fieldwork on students of Mexican descent, especially “dreamers” at Fresno State University in California from 2010 to 2012. During that time, she also traveled to the U.S. to interview Dolores Huerta and Luis Valdez, leaders in the Chicano Movement, and worked with colleagues at the UAQ on an anthology of Chicano literature.

The Austin College Center for Southwestern and Mexican Studies promotes collaborative learning between students and faculty members, with special emphasis on the historical, cultural, social, economic, and political issues facing Texas and Mexico. The center sponsors public lectures and communication with the community and a series of internships and specialized research opportunities for all Austin College students who have an interest in Mexico and the Southwestern United States.

Austin College, a private national liberal arts college located north of Dallas in Sherman, Texas, has earned a reputation for excellence in academic preparation, international study, pre-professional foundations, leadership development, committed faculty, and hands-on, adventurous learning opportunities. One of 40 schools profiled in Loren Pope’s influential book Colleges That Change Lives, Austin College boasts a welcoming community that embraces diversity and individuality, with 46 percent of students identifying as persons of color. The residential student body of approximately 1,300 students and more than 100 expert faculty members allow a 13:1 student-faculty ratio and personalized attention. This year, the campus recognizes 100 years of co-education and has had several opportunities to recognize the history of women and accomplishments of current alumnae. Austin College is related by covenant to the Presbyterian Church (USA) and cultivates an inclusive atmosphere that supports students’ faith journeys regardless of religious tradition. Founded in 1849, the College is the oldest institution of higher education in Texas operating under original name and charter.