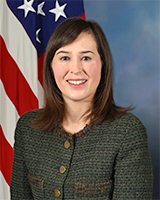 Danielle Tarin is an Appellate Attorney for the National Security Division at the U.S. Department of Justice. She represents the United States on appeals in national security cases involving terrorism and law-of-war offenses. She recently won a case in the Supreme Court challenging the simultaneous service of military officers on both the criminal courts of appeals for the armed forces and the court of appeals that reviews military commission convictions.

Before joining the DOJ, Danielle was the Chief of the Appellate Unit at the Department of Defense Office of the Chief Prosecutor for Military Commissions, where she worked for Brigadier General Mark Martins. There she represented the United States in the military commission trying the alleged mastermind of the September 11 terrorist attacks, as well as in appeals in the case against the alleged U.S.S. Cole bomber, among other war-crimes cases. For her service, she was awarded the Secretary of Defense Medal for Exceptional Public Service.

Danielle earned her undergraduate degrees in Spanish and International Studies from Austin College. She earned her graduate degrees from The University of Virginia Law School and The Fletcher School of Law and Diplomacy at Tufts University. After law school Danielle clerked for the Honorable Judge Deborah Cook of the U.S. Court of Appeals for the Sixth Circuit. She was also a Fulbright Scholar to Egypt.

“My humanities professors, who teach, in part, by letting their students see them think, gave me the tools I would need in my chosen career to critically examine issues as an independent thinker, directly grapple with complex questions, navigate differing viewpoints, foster reasoned debate, and ultimately build consensus around principled positions.”