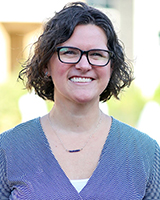 I entered graduate school with one goal: to end up teaching Media Studies at a liberal arts college. When I arrived at Austin College in 2012, I knew I was at the right place for me. My colleagues are committed to providing a rich, textured, and nuanced education, and my students are committed to participating actively in that education.

I love teaching Media Studies because the media are so central to all of our lives. I work to equip students with a particular approach to analyzing the media content they encounter all day every day, to understand texts as the product of multiple forces, to embrace the complexity of the media and how it operates, and to see and comprehend the ideological power of the media. My classes encourage students to recognize the cultural, social and ethical roles and responsibilities of the media, and ask students to consider their roles as agents within mediated culture, allowing each student to develop a sense of self as a thoughtful and engaged member of society.

My primary areas of research interest lie in media industries, particularly media ownership (who owns what?) and marketing strategies including cross-promotion and product placement. I’m also interested in media representations of gender and sexuality.

In addition to teaching in Media Studies, I also teach in Austin College’s interdisciplinary programs Film Studies and Gender Studies.